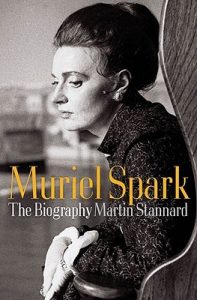 Born in Edinburgh, Scotland, Muriel Sarah Spark, née Camberg, is best known “for the satire and wit with which the serious themes of her novels are presented.” (Britannica.com) An author, poet, and essayist, Spark also wrote biographies on Mary Shelley, John Masefield, and the Brontë family. Since the age of 39, she produced 20 pieces of work in her lifetime until her death in 2006. 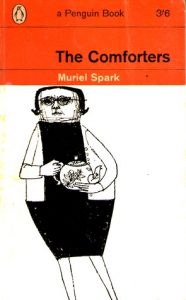 She married Sidney Oswald Spark in 1937 and followed him to Southern Rhodesia, where they had a son, Samuel Robin, a year later. It was a very tenuous relationship to say the least. Once realizing her husband was manic depressive and was prone to violence, Muriel went back to Scotland with Robin. She gathered herself at her parent’s home and then went to London to try to find work. After a few jobs in the Thirties as a teacher of English, then as a secretary at a department store, she worked throughout World War II in Intelligence. She floated around for a time after the war, writing essays and poetry until she got her footing in writing and publishing in the Fifties. She published her first novel in 1957, The Comforters, at the age of 39. The Comforters is the story of Caroline Rose, “plagued by the tapping of typewriter keys and the strange, detached narration of her every thought and action. Caroline has an unusual problem - she realizes she is in a novel” (goodreads.com). An interesting thought and a fascinating concept: what would you do if you thought you were a character in a novel? That your fate and life is determined by a faceless god(dess?) with a pen and paper. And considering how sadistic Muriel could get, especially in her later works, we can only imagine the possible terror.  After that minor success and the continuing production of work, no matter what category it fell into, Muriel became well known throughout the Fifties and Sixties, moving around the world in the process. She was incapable of staying in one place at one time.

You may be wondering why you should care. Why write this blog post or make a small display of a fraction of the work she produced since The Comforters? The answer is easy: her work is something incredible. She is biting, cruel, merciless to her characters. Her plots are unique and forward-thinking, and, considering the time, almost haunting. Her stories are female-centric, but not overly feminine or romantic. She does not sentimentalize or rose-color her books. There is a scene, for instance, in her novel, The Girls of Slender Means, where a building is on fire, and the women of a boarding house have one escape hatch—a small window. The women decide you must be a certain size to fit through the window, and so they start to measure themselves. The skinny go first, and the overweight and pregnant go next. As the room fills with smoke, these women take out a tape measure and begin measuring their hips! 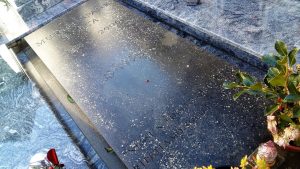 That she churned out work almost every year since her first published book is an astonishing thing. Her life and work cannot be summed up in a single post, but it can be looked at through the eyes of those who knew her, and through her own words, which were never meant to be interpreted any other way than what she intended. She never once hesitated when asked what her work meant.

And so this month in a Center for the Reader display, we celebrate and wish the now-departed author a happy 100th birthday. We hope that you will consider checking it out.

“Dame Muriel Spark: Obituary” by Jenny Turner of The Guardian. 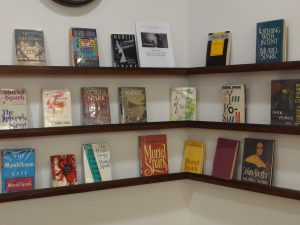 The Prime of Miss Jean Brodie

The Girls of Slender Means

The Ghost Stories of Muriel Spark

(images courtesy of goodreads.com and creativecommons.org)