Mardi Gras is here in Saint Louis, Missouri, and a favorite of mine are macarons of lemon yellow, lavender purple, and lime green. They are a delight to shop for if you have nearby a French pastisserie to select these colorful sweet deserts. I often wondered if I go for the flavor of the shell, or their filling. Of course, it’s the filling that most are interested in. The coloring given to their shells is playful. It is associated with their flavour. 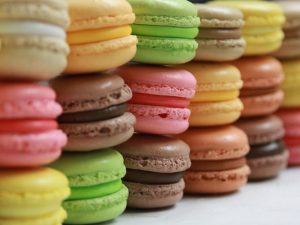 Many hybrids of macarons can now be bought, though a professional pastry chef might still choose to cater to private parties while making them. I was reading today Pierre Herme’s book titled “Macarons” and discovered that he divided his book into chapters that organize the macarons according to: Classics, Fetish Flavours, Signature Macarons, Made-to-Order Macarons. As one chef is noted on saying, “There is something very endearing about macarons”.

According to Hermes, there are thirty-two steps to making a great macaron:

2. Cover the bowls with clingfilm. Using the point of a sharp knife, pierce the film with holes. It is best to prepare the egg whites several days in advance, preferably a week, so that they lose their elasticity. Set the bowls in the fridge.

3. On the day you bake the macarons, prepare two piping bags. Disposable plastic piping bags are best. The first is for the batter, the second is for the ganache or cream filing. Using kitchen scissors, cut the points off the piping bags 5 cm from the end.

4. Insert a nozzle right to the end of the bag.

5. To make sure the macaron batter doesn’t escape when you spoon it into the bag, push the nozzle firmly into the bag with you finger.

6. Prepare the baking trays for the shells. Lay the template of circles on the first baking tray, then cover it with a sheet of baking parchment. Depending on their size, you will need three or four baking trays.

7. For the macaron batter. Weight out the ground almonds and the icing sugar separately.

8. In a bowl, stir together the ground almonds and icing sugar. Place a medium-mesh sieve over a large bowl. Sift by gently shaking the sieve.

9. If you have chosen a recipe that includes food colouring(s), mix it/them into the first bowl of egg whites.

10. Pour the coloured (or not) egg whites into the bowl of ground almonds and icing sugar, but do not stir.

11. If you have chosen a recipe that includes food colouring(s), mix it/them into the first bowl of egg whites.

12. Pour the water into a small saucepan then add the sugar. Put the probe of an electronic thermometer into the sugar. Cook over a medium and as soon as the sugar reaches 115C, simultaneously start to whisk the second quantity of liquefied egg whites to soft peaks at high speed in an electric mixer with a whisk attachment. Dip a pastry brush in cold water. When the sugar boils, clean the sides with the damp brush.

13. When the sugar reaches 118C, take the suacepan straight off the heat. Pour the hot sugar over the egg whites before the meringue is fully formed. Continue whisking at high speed for another minute.

14. Reduce the whisking speed to a medium speed and continue whisking the egg whites for about two minutes. You have just made an Italian meringue.

15. Wait until the Italian meringue has cooled down to 50C by the electronic thermometer (about four or five minutes) before taking it out of the bowl of the electric mixer.

16. Tip the Italian meringue out of the mixer bowl. Using the spatula, stir it into the mixture of icing sugar and ground almonds folding in the batter and stirring outwards from the middle to the sides, rotating the bowl in your hands as you stir.

17. Continue stirring, still from the middle of the batter out to the sides of the bowl and rotating the bowl as you do. When the batter is just starting to turn glossy, it is ready. The batter should resemble slightly runny cake dough.

18. Take the first piping bag you prepared in your half-open hand. Scoop up a little batter on the spatula. Scrape it into the bag. Fill the bag with half the batter by scraping it on to the side of the bag.

19. Squeeze the batter into the bag so that it slips right down to the end of the piping bag. This is important because there should not be any space or air bubbles in the batter.

20. Twist the end of the bag down tightly with several twists to trap the batter firmly in the bag.

21. Pull on the nozzle to begin piping the shells.

22. Position yourself about 2 cm above the first baking tray. Hold the piping bag vertically and gently squeeze the top to pipe out the first shell which should be just short of 3.5 cm in diameter, as the batter will spread during cooking.

23. Stop squeezing the piping bag. Move forwards a little and give a quarter turn to block the batter. Continue piping the shells leaving a 2 cm gap between them and arranging them in staggered rows. This is why the template is very important.

24. When you have used up all the batter in the bag, fill it up again with the other half of the batter. Continue piping the shells on to the other baking trays (with the template).

25. To flatten out the points that have formed on the shells, lift up the baking trays one by one and rap them lightly on the work surface covered with a kitchen towel.

26. Lift a corner of the baking parchment, slide out the template and lay it on the other baking trays, one by one as you use them.

27. To make sure the baking parchment doesn’t move during cooking time in the fan oven, stick down the four corners with dabs of the batter. Press gently on the corner to make sure they are firmly held in place.

28. Allow the shells to stand at room temperature for about 30 minutes until a skin forms on the surface. The batter should not stick to your finger.

29. Pre-heat the fan oven to 180C, but be aware that the cooking temperature in your oven may vary between 165C and 190C. The shells should not change colour during cooking. You should set the Temperature of your oven according to the type of oven you have.

30. Depending on the size of your oven, you can put all three or four baking trays in the oven together, otherwise, bake them in two batches. Bake for 12 minutes, briefly opening and shutting the oven door twice to let out the steam. Open the door the first time after eight minutes (at that point the ‘foot’ of the shells will be cooked) then a second time for 10 minutes.

32. Carefully unstick half the cooled shells from the baking parchment, one at a time by hand. Lay them flatside up, side by side on another sheet of baking parchment. They are ready to be filled. You can also store them for 48 hours in the fridge or freeze them.”

Good luck with your baking and take your time to learn. If you have little patience, go to your local French patisserie and buy them!