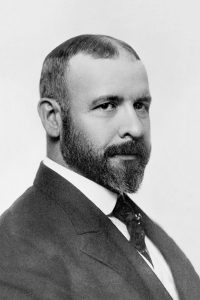 Renowned architect Louis Sullivan has a rich history in St. Louis. One of the most well-known buildings in the United States is his beautiful Wainwright Building (709 Chestnut Street). Designed by Dankmar Adler and Louis Sullivan, assisted by local St. Louis architect Charles K. Ramsey, and built between 1890 and 1891, this was their second major commission for a tall building (the first being the Auditorium Building in Chicago). These days, it’s hard to imagine that 10 stories was a very tall building, but back in 1891, this building was an extremely influential prototype of the modern office building and is considered to be one of the first skyscrapers.  In this building, Sullivan was able to express his theories about tall buildings and it clearly shows his tripartite composition, which serves to emphasize the height of the building. As your eye is drawn upwards, you become aware of how the windows are set slightly behind the piers and columns, helping to create this strong vertical aesthetic.  Sullivan’s distinctive ornamentation is also evident here, both on the spandrels and below the windows, and on the wide frieze beneath the large, deep cornice. The naturalistic, yet formalized foliage is richly decorative (and to those who know Sullivan’s designs, unmistakable). 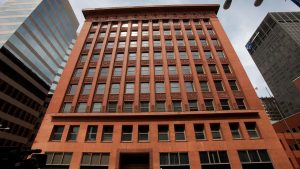 So who was Mr. Wainwright? A St. Louis brewer, Wainwright had been an important figure in railway development in the region, but in 1889 he consolidated his father’s Wainwright Brewery Company with a brewing syndicate and established the St. Louis Brewers Association. Needing space to manage the Association, Wainwright commissioned Adler and Sullivan to build this office building, envisioning street-accessible shops on the first floor, and then offices in the floors above. Sadly, before the building was completed, Wainwright’s wife, Charlotte, died at the young age of 34. Wainwright commissioned Louis Sullivan to erect the beautiful Wainwright Tomb in Bellefontaine Cemetery.  Also a beautiful example of Sullivan’s architecture and design, this Tomb became a Louis Sullivan landmark in 1971. 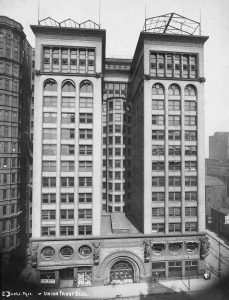 While many people are most familiar with the Wainwright Building, there is another outstanding example of Sullivan’s architecture and design in the Union Trust Building (now Hotel St. Louis) at 705 Olive Street. Constructed in 1892, this building was designed by Sullivan’s firm right after the completion of the Wainwright Building. Built in a “U” shaped plan with two wings surrounding a central light court, this is a perfect example of how to bring the maximum amount of light and air into functional design. The original design balanced round arches at the top with large round window at the bottom (and also balanced huge gargoyles, as seen in this older photo). Like the Wainwright, the height of this building is emphasized, drawing your eye up all 14 stories.  Although this beautiful building fell into disrepair over the years, the recent renovation by Restoration St. Louis has given it new life and a new purpose. Still in place are Sullivan’s elaborate terra cotta trim, cornice, windows, and more.  This fantastic project, which you may read more about here, has turned this building back into a jewel of architecture.

Unfortunately, not all of Sullivan’s buildings have survived into the present day. The 1893 St. Nicholas Hotel, located at the corner of Locust and 8th Street, had distinctive terracotta snowflake embellishments, but fell to the wrecking ball in 1973.  For those who love Sullivan’s ornamentation and design, however, there is plenty to still savor in the collections of City Museum. City Museum has an outstanding collection of Sullivan’s ornamentation, including a cornice from the Chicago Stock Exchange building, balusters from the Carson, Pirie Scott Building (also from Chicago), elevator grilles and much more. For those who mourn the loss of Sullivan’s buildings, some solace may be found in visiting City Museum’s collection. 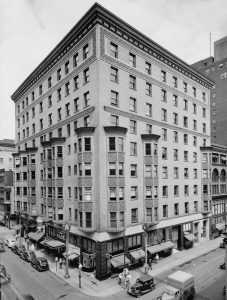 If you would like to learn more about Louis Sullivan, we have many materials in our collections. We will also be hosting a “Sullivan in St. Louis” series of programs, which starts on Thursday, September 12th with a lecture from noted architect and Sullivan expert John Vinci, as well as a presentation from architect Nathan Zierer about the Union Trust Building project.  Through the month of September, we will also host programs on Richard Nickel, the historical preservationist devoted to saving Sullivan’s work, a presentation from Rick Erwin of City Museum on their collection, a program from Bellefontaine Cemetery on the Wainwright Tomb, and more. Information may be found on our online calendar at slpl.org, or ask any of our friendly staff.