August 4, 1892, is infamously remembered as the ill-fated day when Andrew and Abby Borden were bludgeoned to death in their Massachusetts home, slaughtered in broad daylight while daughter Lizzie, just a floor removed from the crime scene, heard nothing extraordinary. The murders for which she is notorious occurred not so long ago that her story has dissolved entirely into urban legend, but the case itself was so sensationalized that liberties are often taken. The children’s song--most often the first, and sometimes only, introduction to the crime--is wholly inaccurate.

And gave her mother forty whacks;

When she saw what she had done,

She gave her father forty-one.

To set the record straight, the murder weapon was not an axe, but a hatchet, and Abby Durfee Gray Borden was Lizzie’s stepmother, not her mother. Lizzie gained both independence and a significant inheritance in one fell stroke, or actually about thirty strokes in total, according to the coroner, but nowhere near the eighty-one cited by the verse.

And though she was, and still remains, the only suspect of this familial carnage, Lizzie Borden was acquitted of the murders. Like most highly publicized, sensational cases, the nation was obsessed with the spectacle of the Greatest Trial of the Century, and as it remains an unsolved case, interest lingers. 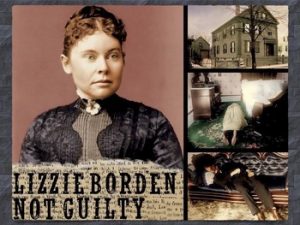 For those of you drawn to train wrecks, natural disasters, and serial killers, the gory details about the trial can be found at this link. Not to be outdone by the plethora of non-fiction dedicated to the Borden incident, Center for the Reader offers a substantial collection of parricide fiction for the voyeur of the macabre, as shown by this small body of evidence:

The Secrets of Lizzie Borden: Lizzie Borden should be one of the most fortunate young women in Fall River, Massachusetts. Her wealthy father could easily afford to provide his daughters with fashionable clothes, travel, and a rich, cultured life. Instead, haunted by the ghost of childhood poverty, he forces Lizzie and her sister, Emma, to live frugally, denying them the simplest modern conveniences. Suitors and socializing are discouraged, as her father views all gentleman callers as fortune hunters. Lonely and deeply unhappy, Lizzie stifles her frustration, dreaming of the freedom that will come with her eventual inheritance. But soon, even that chance of future independence seems about to be ripped away. And on a stifling August day in 1892, Lizzie’s long-simmering anger finally explodes… Vividly written and thought-provoking,The Secrets of Lizzie Borden explores the fascinating events behind a crime that continues to grip the public imagination - a story of how thwarted desires and desperate rage could turn a dutiful daughter into a notorious killer.

See What I Have Done: On the morning of August 4, 1892, Lizzie Borden calls out to her maid: Someone’s killed Father. The brutal ax-murder of Andrew and Abby Borden in their home in Fall River, Massachusetts, leaves little evidence and many unanswered questions. While neighbors struggle to understand why anyone would want to harm the respected Bordens, those close to the family have a different tale to tell—of a father with an explosive temper; a spiteful stepmother; and two spinster sisters, with a bond even stronger than blood, desperate for their independence. As the police search for clues, Emma comforts an increasingly distraught Lizzie whose memories of that morning flash in scattered fragments. Had she been in the barn or the pear arbor to escape the stifling heat of the house? When did she last speak to her stepmother? Were they really gone and would everything be better now? Shifting among the perspectives of the unreliable Lizzie, her older sister Emma, the housemaid, Bridget, and the enigmatic stranger Benjamin, the events of that fateful day are slowly revealed through a high-wire feat of storytellingdutiful daughter into a notorious killer.

Maplecroft: The people of Fall River, Massachusetts, fear me. Perhaps rightfully so. I remain a suspect in the brutal deaths of my father and his second wife despite the verdict of innocence at my trial. With our inheritance, my sister, Emma, and I have taken up residence in Maplecroft, a mansion near the sea and far from gossip and scrutiny. But it is not far enough from the affliction that possessed my parents. Their characters, their very souls, were consumed from within by something that left malevolent entities in their place. It originates from the ocean’s depths, plaguing the populace with tides of nightmares and madness.

Lizzie Borden: "Lizzie Borden took an axe . . ". Or did she? One hundred years ago, Andrew and Abby Borden were brutally murdered. Their youngest daughter Lizzie was arrested and tried for the killings and--shockingly to many--was found innocent. "This evil cannot hide from me. No matter what guise it assumes, I will be waiting for it. With an axe."

Lizzie: The fascinating novel of a passionate woman, freed of history and legend but trapped by a shocking secret, and the final uncompromising act of a murderous heart.