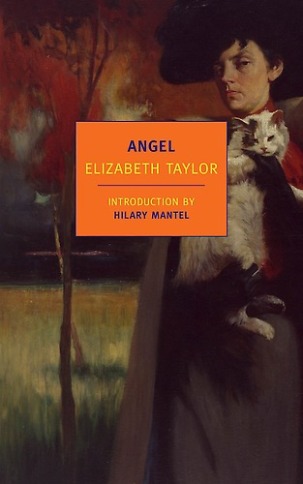 Elizabeth Taylor (the midcentury British writer) has had the misfortune of sharing a name with one of the twentieth century’s biggest celebrities. A clear-eyed, morally incisive novelist overshadowed by her cinematic namesake: Taylor would probably be the first to chuckle at the irony. Her wonderful 1957 novel Angel is a novel about the delusional echo-chamber in which a lot of people live–writers in particular–and it strikes its characteristic tone from the very first sentences:

“‘into the vast vacuity of the empyrean,'” Miss Dawson read. “And can you tell me what ’empyrean’ means?”

“It means,” Angel said. Her tongue moistened her lips. She glanced out of the classroom window at the sky beyond the bare trees. “It means ‘the highest heavens’.”

This is our introduction to Angelica Deverell, the romantic, weirdly self-possessed young novelist who claims she spends her free time playing the harp and never met a Thesaurus word she didn’t love. She is one of the more deliciously repulsive characters I’ve encountered in fiction lately. Born into a family of grocers in a gray working-class English town, Angel (as she’s called) spends her time dodging school, avoiding any kind of housework, and making up lies about herself, with which she entertains the neighbor children. Her lush and moonlit mythology revolves around Paradise House, the estate where her aunt is employed as a servant. These tales soon spread through the small town, shaming Angel’s mother Mrs. Deverell, who has the impossible task of trying to raise this child on her own. When Angel’s aunt suggests her niece for an open position at Paradise House, Angel’s response is bracing and almost terrifying in its total arrogance and insensitivity.

Angel, meanwhile, faking illness to get out of school, feels the first stirrings of literary ambition. In a feverish trance she scrawls her first novel in composition books. What few glimpses we get of this book are more than enough to infer its badness: some people use a corkscrew to open a bottle of champagne, and a young lady’s honor depends upon the outcome of a game of cards.

It is of course a wild success. Though Angel claims not to read, and knows nothing about the literary world–she sends her novel to the publisher she glimpses for a second on an open page in a public library. The book is savagely reviewed but its hyperbolic prose and light sexual scandal (sound familiar?) makes it a minor sensation. Soon the young writer is traveling to London and contemplating follow-ups with her publisher:

“Do you think you will write another novel?”

“Oh yes. I can let you have another one in a few months.”

“So soon? You must be careful not to tire yourself too quickly, or write yourself out.”

“I should never do that,” she said simply and drank her tea.

“What is the theme of the new book?”

“It is about an actress.”

“I have never been to one.”

“Then you are a great reader, perhaps?”

“No, I don’t read much. I haven’t got any books, and nowadays I am always writing.”

“But even so, most authors take some interest in the works of others. Is there no Public Library you could join?”

A little colour came into her cheeks and she said, “I don’t think I should want to.”

In this dialogue Taylor coolly reveals all the qualities that make Angel second-rate, and as Hilary Mantel writes in her introduction, “Angel is a book in which an accomplished, deft, and somewhat underrated writer has a great deal of fun at the expense of a crass, graceless, and wildly overpaid one.” Perhaps the funniest instance of this is when Angel decides (mid-novel) to switch the setting of her latest book from modern-day England to ancient Greece, without doing any research. But at the same time I think Taylor sees a little bit of herself in Angel, as do I. What writer could go on if they didn’t secretly believe that their own work was more fascinating, more worthwhile than many others’?  There’s an egotism inherent to the craft, and while Angel exhibits a bloated, grotesque form of it, the sins Taylor attributes to Angel — inflated self-regard, a reflexive indifference to others, absorption in fantasy — could also be considered occupational hazards of a life devoted to fiction.

In the second half of the novel, the continued success of Angel’s books leads toward the realization of her childhood dreams and Paradise House. It is in the novel’s latter stages that really displays the subtlety of Taylor’s gifts as a novelist, as we see Angel through the gentle mockery of her publisher and his wife; through the eyes of her husband Esme, who seems to be a better painter than she is a writer, though Angel is the only one who buys his paintings; through her long-time companion, Esme’s sister, an aspiring poet with the perfectly Edwardian name Nora Howe-Nevinson.

The next day Nora returned. She was to stay for more than thirty years and to make herself useful untiringly, relieving Angel of many burdens. Her service to literature was more difficult to assess. She gave up writing her own poetry to devote herself to her friend. The sacrifice helped to lengthen the list of Angel’s books. The poetry was lost and the novels were gained, and posterity was as indifferent as it could be about both.

It is the nature of such sacrifices, such devotions, that Taylor interrogates in Angel, and she does this with no sentimentality whatsoever. If Taylor can see the monster inside every writer, she can also sympathize with the longings of her difficult, willful, singular creation–and see her human sufferings and disappointments. By the end of the novel we feel for Angel, much as we would hate to become anything like her.