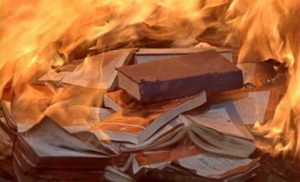 May 10, 1933, is infamously remembered as the day university students from the Nazi German Students' Association, Deutsche Studentenschaft, gathered at thirty-four different German campuses, and in a “symbolic act of ominous significance,” threw an estimated 25,000 volumes of “un-German” books onto bonfires, presaging an era of state censorship and control of culture. Hermann Goering, commissar for the Nazi campaign against “trash and smut” literature, supported the stance of professional librarians, Wolfgang Herrmann and Wilhelm Schuster, that lending libraries contaminated the populous with their immoral books. Contrary to Herrmann and Schuster’s blacklist compilations and principles for the cleansing of public library materials, we defend the rights of authors to unconstrained creation and the rights of readers to unfettered access of resources, materials that may be offensive to some. This position, according to Nazi philosophy, defines Center for the Reader as a “literary bordello” that provides the very literature the Purification Committee deemed culturally destructive and degenerate.

Taken straight from the Blacklist for Public Libraries and Commercial Lending Libraries, and Principles for the Cleaning of Public Libraries, respectively, the following Guidelines demanded that librarians eliminate the most detrimental books from their libraries, including:

In short, the fiction sitting on the shelves in your St. Louis Public Library.

One naturally assumes that Jewish authors were blacklisted and that German authors were targeted more than any other nationality. What is a surprise to some, however, are these authors whose fiction works were considered so unscrupulous that they had to be physically destroyed to protect the purity of German literature:

All Quiet on the Western Front (Erich Maria Remarque): This is the testament of Paul Bäumer, who enlists with his classmates in the German army of World War I. These young men become enthusiastic soldiers, but their world of duty, culture, and progress breaks into pieces under the first bombardment in the trenches. Through years of vivid horror, Paul holds fast to a single vow: to fight against the hatred that meaninglessly pits young men of the same generation but different uniforms against one another – if only he can come out of the war alive.

Call of the Wild (Jack London): Life is good for Buck in Santa Clara Valley, where he spends his days eating and sleeping in the golden sunshine. But one day a treacherous act of betrayal leads to his kidnap, and he is forced into a life of toil and danger. Dragged away to be a sledge dog in the harsh and freezing cold Yukon, Buck must fight for his survival. Can he rise above his enemies and become the master of his realm once again?

A Farewell to Arms (Ernest Hemingway): In 1918, Ernest Hemingway went to war, to the war to end all wars. He volunteered for ambulance service in Italy, was wounded, and twice decorated. Out of his experiences came A Farewell to Arms. Hemingway's description of war is unforgettable. He recreates the fear, the comradeship, the courage of his young American volunteer, and the men and women he meets in Italy with total conviction. But A Farewell to Arms is not only a novel of war. In it, Hemingway has also created a love story of immense drama and uncompromising passion.

The Invisible Man (H.G. Wells): This masterpiece of science fiction is the fascinating story of Griffin, a scientist who creates a serum to render himself invisible, and his descent into madness that follows.

The Jungle (Upton Sinclair): A searing novel of social realism, The Jungle follows the fortunes of Jurgis Rudkus, an immigrant who finds in the stockyards of turn-of-the-century Chicago a ruthless system that degrades and impoverishes him, and an industry whose filthy practices contaminate the meat it processes. From the stench of the killing-beds to the horrors of the fertilizer-works, the appalling conditions in which Jurgis works are described in intense detail by an author bent on social reform. So powerful was the book's message that it caught the eye of President Theodore Roosevelt and led to changes to the food hygiene laws.

U.S.A. (John Dos Passos): In the novels that make up the U.S.A. trilogy - The 42nd Parallel, 1919, and The Big Money - Dos Passos creates an unforgettable collective portrait of America, shot through with sardonic comedy and brilliant social observation. He interweaves the careers of his characters and the events of their time with a narrative verve and breathtaking technical skill that make U.S.A. among the most compulsively readable of modern classics. A startling range of experimental devices captures the textures and background noises of 20th-century life: "Newsreels" with blaring headlines; autobiographical "Camera Eye" sections with poetic stream-of-consciousness; "biographies" evoking emblematic historical figures like J.P. Morgan, Henry Ford, John Reed, Frank Lloyd Wright, Thorstein Veblen, and the Unknown Soldier. Holding everything together is sheer storytelling power, tracing dozens of characters from the Spanish-American War to the onset of the Depression. The U.S.A. trilogy is filled with American speech: labor radicals and advertising executives, sailors and stenographers, interior decorators and movie stars. Their crisscrossing destinies take in wars and revolutions, desperate love affairs and harrowing family crises, corrupt public triumphs and private catastrophes, in settings that include the trenches of World War I, insurgent Mexico, and Hollywood studios in the silent era, Wall Street boardrooms, and the tumultuous streets of Boston just before the execution of Sacco and Vanzetti.