Learning about Scottish traditions was part of my upbringing, as my father’s parents had moved from Scotland to Canada just before he was born. He could turn on the Scottish brogue when asked about his family history. Thank goodness my father did not inherit the bagpipes from my Grandpa Fraser. 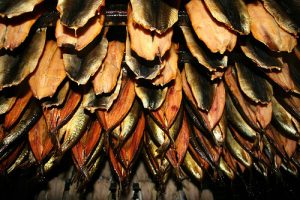 I was only indoctrinated into Scottish highland dancing and foods. We had to learn the Sailor’s Hornpipe and the Highland Fling when we were only about eight years old. We were only allowed to wear one of the four family tartans, dress and hunting, ancient and modern. A test of our knowledge of Highland dancing came when we spent a summer in Scotland with my parents and my father was trying to impress a restaurant owner of our great dance skills!

Rather than continuing with Scottish dancing, I preferred to gain as much experience cooking typical Scottish meals. Saturday mornings we ate kippers and homemade oatcakes, made by my mother. We enjoyed kippers more in the summer when we had the windows wide open to air out the strong smell. The label said they came from Wick, Scotland. So, several years later, when we were “finding our roots in Scotland”, we stayed overnight at a Bed and Breakfast in Wick. The only place we saw kippers being sold was from a little store near the harbor. Sure enough, we brought it back to the family we were staying with, and enjoyed a very smelly kipper breakfast, along with freshly homemade oatcakes with melted butter on top. Mmmmmmm…..delicious!

Kippers are actually herrings split open, hung in pairs by the tail, and then smoked. An interesting fact that Slater (1998) writes about is the practice of dying kippers with a coal-tar dye, known as Brown F (for) K (kippers). This was apparently a wartime practice that is still in use today. Not everyone prefers their kippers dyed. 80 per cent of Scots prefer undyed fish as do Americans.

To prepare a kipper for breakfast, start by preheating your oven to 375 degrees Fahrenheit. Next, place your kipper on a buttered sheet of foil which you put on a baking tray in your oven. Don’t forget to put a bit of butter on the top of your kipper. Seal up the foil and bake for 15 minutes. Each person can enjoy their own kipper. My favourite way of eating kippers was taking a bite-sized piece of kipper and placing it on top of a freshly made hot buttered oatcake. My mother would make our oatcakes on her black, cast iron griddle.

The cold winds of winter were warmed by eating for breakfast a hearty bowl of steaming hot porridge. We started by boiling a pint of hot water, with 2 oz. of medium oatmeal. Once it was boiling, I turned it down to simmer and continuously stirred until it thickened. This usually took about 30 minutes. Many add salt to their porridge. I do not, as I prefer a low salt diet. However, I do add a spoonful of brown sugar and milk to my bowl of hot porridge before spooning down my breakfast.

A Year in A Scots Kitchen