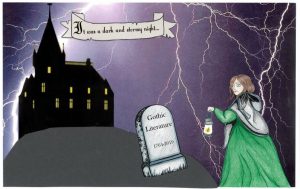 The first recognized work of Gothic literature, The Castle of Otranto, was published in 1764, with the genre exploding into popularity between 1790 and 1800. Over the centuries, the genre continued in popularity, adapting and bleeding into other genres, cultures, and time periods. Gothic stems from the root Goths, which refers to German Gothic architecture, so named because the stories often take place in crumbling castles and abbeys or manors, and include typical tropes and literary elements such as the supernatural, family secrets or curses, possible hauntings, and dreary weather. With two branches, Gothic Romance and Gothic Horror, and over 250 years of materials, you won’t run out of options anytime soon.

The Castle of Otranto: A Gothic Novel by Horace Walpole, 1764

Horace Walpole loved the Gothic so much, he built a Gothic castle named Strawberry Hill House. Don’t let its name fool you, it fits right in with Walpole’s writing; in fact, history claims that Otranto was inspired by a nightmare Walpole had while living there. The story is told as a discovered manuscript written during the Crusades. Manfred, a prince of Otranto, is preparing for the arranged marriage of his son while attempting to avoid a prophecy that claims the castle “should pass from the present family, whenever the real owner should be grown too large to inhabit it.” From there, Walpole incorporates a heap of elements that would soon define the genre: ghosts and maidens and secrets, oh my!

Austen’s novel satirizes the tropes and devices used in the Gothic literature of her time. In particular, Northanger Abbey is said to be a response to the work of Ann Radcliffe, a major contributor to the genre. Austen references Radcliffe's The Mysteries of Udolpho (1794), as the novel that heroine Catherine is reading, and other popular novels.  Catherine’s paranoia and imagination is what makes her tale a Gothic one.

Victorian literature typically required authors to portray their women as angels or demons, but Brontë’s 1847 story used the uncanny of Gothic literature to create a place where the Victorian ideal of “the angel in the house” met the “madwoman in the attic”…literally. Jane Eyre is presented as an autobiography of Jane, from her childhood to early adulthood, and served with a seasoning of rebellious Victorian feminism, a dash of locked doors and secrets, and just the right amount of the supernatural.

The Little Stranger by Sarah Waters, 2009

Fast forwarding to the 21st Century, Waters’ novel is a modern work of Gothic literature, still incorporating some of the major elements of the 18th century Gothic, but with a twist. One postwar summer in his home of rural Warwickshire, Dr. Faraday, the son of a maid who has built a life of quiet respectability as a country physician, is called to a patient at lonely Hundreds Hall… and from there his story gives us some serious Jane Eyre vibes.