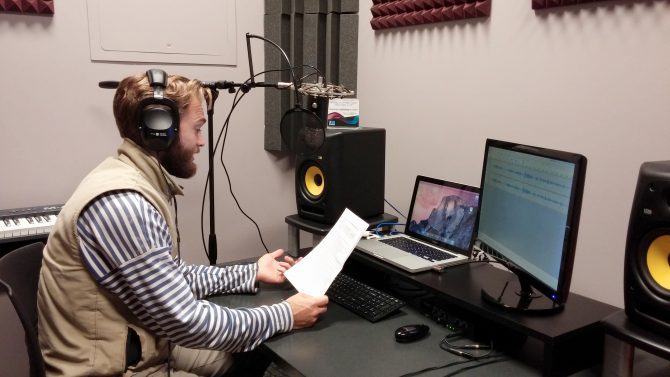 Lately, on Thursday afternoons, archaeologist Scott Johnson has been in the Recording Room in Creative Experience, recording a podcast about low-tech solutions to modern-day problems.

Scott, a researcher, author and educator who holds a Ph.D. from Tulane University, has been passionate about preindustrial technologies since he was a kid. His early pastimes included converting a boat to a sailboat, making homemade snowshoes, building a catapult, and other tinkering. Scott founded the soon-to-be non-profit Low Technology Institute this year to look at ways that nonindustrial technologies, which don’t rely on fossil fuels, can be used to sustain us when non-renewable resources are depleted.

The Low Technology Institute is interested in both ancient and futuristic technologies that contribute to sustainability, and the term, “nonindustrial technology” is carefully chosen. Scott notes that “primitive technology” has a pejorative context, and “preindustrial” leaves out innovations of contemporary cultures that subsist with little or no access to industrialized technology. The Institute’s projects include an academic journal, a blog and a weekly podcast, which Scott records in Creative Experience.

The first three episodes of the Low Tech Podcast introduce listeners to the movement and delve into environmental issues and sustainable agriculture. You can subscribe on iTunes, Stitcher, or TuneIn, and you can follow the Low Technology Institute on Twitter and Facebook.

Scott is no Luddite*, and the irony of using technology like computers to conduct research, record podcasts, and raise awareness about the precarity of our energy system is not lost on him. “If we were smart,” Scott says, “We would use our remaining fossil fuels to build an infrastructure that didn’t need fossil fuels.”

*at least as commonly understood. Scott has written a blog post about rethinking Luddites.