The streaming service FX on Hulu offers a trip back in time with the miniseries "Mrs. America" which debuts April 15, 2020 with its first three episodes; subsequent episodes will be aired each week on Wednesday. "Mrs. America" explores the movement to ratify the Equal Rights Amendment, which was passed by the U.S. Congress in 1972, and the opposition to ERA ratification spearheaded by Phyllis Schlafly, "the sweetheart of the silent majority" and the titular "Mrs. America." (Spoiler: Mrs. Schlafly's opposition succeeded and the amendment, the text of which is found above, failed to receive the ratification of 2/3 of the states before the original seven-year deadline that was imposed by Congress, later extended to 1982. While the Commonwealth of Virginia became the necessary 38th state when it ratified the amendment on January 27, 2020, there is - to say the least - a lack of clarity or unanimity as to whether an "alternative route" to ratification could be successful.)

St. Louis Public Library has a healthy collection of books written or co-written by Mrs. Schlafly, beginning with the first she published, A Choice Not An Echo, which argued for the presidential candidacy of Barry Goldwater in 1964, through The Conservative Case for Trump, published after her death in September 2016, but before Donald Trump's election to the Presidency of the United States.

The Library also has books and other materials by and about (and even a magazine co-founded by) most of the other major players in the fight for the ERA who feature in, and lend their names to episodes of, the FX show: the episodes that drop on April 15 are titled "Phyllis," "Gloria," and "Shirley," followed by "Betty," which airs on April 22, and "Bella" on May 13. 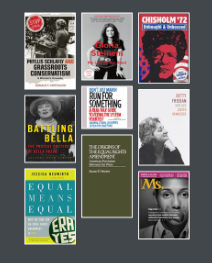 We have pulled together a list of these books and others from and about the ERA era, as well as more recent titles that call into question the aspirational Virginia Slims tagline of the same period: "You've Come a Long Way, Baby." Many of the titles are available digitally as an eBook or audiobook, and can be enjoyed from home until the Library reopens its physical locations, currently closed due to the COVID-19 crisis. Until then, may you be safe, and if you watch "Mrs. America" we hope you find it informative and/or entertaining - and that it points you toward a few new (to you) books to pick up and explore.