Those who know their English history or have seen the movie “V for Vendetta” are likely familiar with these words, or some derivation thereof. This famous verse calls upon humanity to never forget how close Guy Fawkes came to killing King James I and destroying both houses of English Parliament.

The year was 1605, King James I had been ruling for only two years but English Catholics were furious with him. Catholics had hoped James I would ease the religious persecution started by Queen Elizabeth I. However after he exiled all the Catholic priests, they were losing their patience. In an effort to replace both him and Parliament, Robert Catesby organized the Gunpowder Plot. 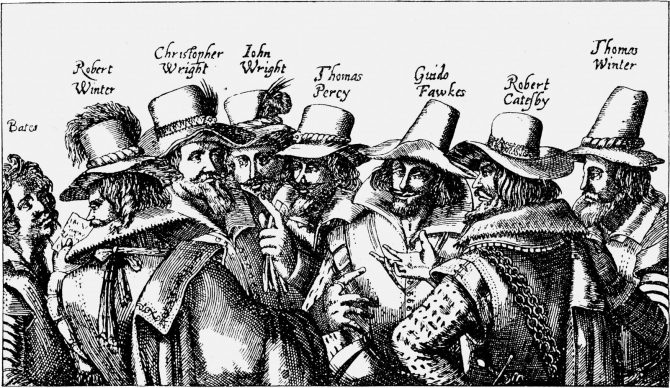 In essence the plot was twofold. The first action was to blow up Parliament and kill King James I.

The second was to kidnap Princess Elizabeth in the confusion following the explosion to install her on the English throne as a Catholic puppet queen. To accomplish the first part, a room was rented beneath the House of Lords, or the upper house of Parliament. There barrels of gunpowder would be stored until the State Opening of Parliament, an event which marks the beginning of a session and includes a speech from the throne. This opening was originally planned for February 1605, but had been delayed by the plague till October 3rd and then once again till November 5th. Despite Parliament's delay, by the end of July Catesby’s group had managed to store 36 barrels of gunpowder in their room.  Now all they had to do was wait. On the night of November 4th Guy Fawkes, who was charged with lighting the gunpowder’s fuse, was discovered and captured. When the news of his arrest reached Catesby the group fled and abandoned plans for kidnapping the Princess.

Over the next few days Catesby and a few other conspirators would be killed trying to escape. The rest of the group was captured and sentenced to be hanged, drawn and quartered. A rather gruesome death, the person is hung by their neck till nearly dead, before being placed on a table. There, while still alive are cut open and have their intestines and genitals removed and burnt in front of them. They are then beheaded and their body is cut into quarters. Fawkes escaped the worst of this by either throwing himself or falling off the hanging ladder and breaking his neck.

People celebrating the plot's failure lit bonfires around London and Parliament and declared November 5th as a day of thanksgiving. A day to celebrate that the Gunpowder Plot had failed. Over time November 5th came to be known as Guy Fawkes Day, or Bonfire Night, and became an annual commemoration celebrated in the United Kingdom with fireworks, bonfires, and the burning of Guy Fawkes effigies. Also, to this day, the State Opening of Parliament starts with a ceremonial searching of the cellars of Parliament.