Lobsters must be kept alive until they are cooked. Typically lobster fishermen work alone, and leave the dock at dawn. They haul their lobster traps all day, whatever the weather. Often they might haul up to 500 lobsters a day! 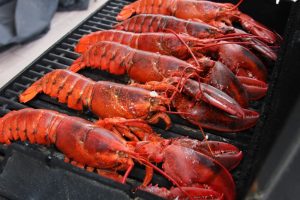 Lobster traps, or "pots" are constructed of a vinyl-coated galvanized steel mesh which does not rot, nor break too frequently. A trap has two rooms, one for the bait, and one for the trap. Rubber bands are snapped on the the pincher and crusher claws of each lobster to prevent them from hurting humans or each other.

Coral - Unfertilized roe in a female lobster found throughout the tail.

Cull - A lobster missing one or both claws.

Keeper - A lobster measuring 3 1/4 to 5 inches from the eye sockets to the tops of the tail, the legal limits for market.

Ripper - The smaller of the two large claws, with finer teeth.

Short - A lobster that falls below the legal size.

Smellers - Another name for lobster antennae.