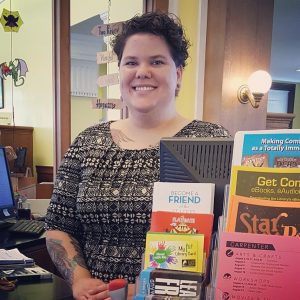 This month, we're starting a new feature on our blog. We know our customers may visit one location more than others, so we thought we would take an opportunity to introduce some of our staff in our region. For our first "Get to Know" post, we're featuring Tonnya Joy, our Branch Manager at Barr Library.

How long have you worked for SLPL? Over eight years. I started as the Youth Services Librarian at Barr Branch in 2011 and became the Branch Manager in 2013.

Which historical figure would you like to meet?  This is a tough question because there are so many historical figures I would love to meet! If I had to pick just one it would be William Shakespeare. I was a voracious reader as a child and my Mom always encouraged us to read what interested us. After seeing--and falling in love with--Baz Luhrmann’s Romeo + Juliet when I was 10, I wanted to read the “source.” So, my grandparents gifted me a 1932 edition of The Complete Works of William Shakespeare they found in a used bookstore and I was hooked, if not obsessed. That book not only sparked my love for Shakespeare but it spawned my interest in theatre. I spent the next 11 years living and breathing theatre and even picked Theatre Design as my first major in college.

What do you want to tell everyone that they might not know about the Library?  One of the misconceptions I hear all the time is that libraries are archaic and a dying institution, but that’s far from the case. The vast majority of libraries are nothing like the  old stereotype of being quiet, book-filled depositories with gray-haired librarians shushing you that’s often depicted in pop culture. Instead, we are neighborhood (and community) hubs that provide not only traditional services, like books and reference assistance, but things like hotspots, telescopes, streaming content, spaces for community meetings and programs, like free tax-assistance, etc.

Which books/genres do you like to read?  My reading habits are eclectic and depend on my mood. Sometimes I reach for a book I've read a dozen times, like Betty Smith’s A Tree Grows in Brooklyn or a children’s picture book, like Jon Klassen’s This is Not My Hat. I cook and bake a lot so I read a lot of cookbooks too. My favorite genres include true crime, medical thrillers, young adult literature, and classic literature.

Which book has helped you think about life differently?  Of all the books I’ve read, the one that immediately stands out is The Jungle by Upton Sinclair. Although a work of fiction, Sinclair’s novel was an exposé on the grim realities of conditions in Chicago stockyards, industrialization, and working-class immigrant life in the early 20th Century.

Do you have any literary tattoos?  Yes! I have a three-quarter sleeve that was inspired by some of my favorite books from childhood: 20,000 Leagues Under the Sea, Around the World in Eighty Days, and Harry Potter. I also have one inspired by Robert D. San Souci’s The Firebird which is based on the famous ballet of the same name.