The silver screen is no stranger to remakes and adaptations of our favorite tales. Every technical leap forward seems to have audiences eager to see our most beloved characters portrayed in fantastic new ways. J.K. Rowling’s wizarding world of Harry Potter is no exception. Followers of the franchise have already enjoyed two films that extend beyond the books chronicling Harry’s seven years as a student at Hogwarts School of Witchcraft & Wizardry. The “Fantastic Beasts”, opens a new window films broaden the scope of Rowling’s immersive world, and will hopefully spell success for an upcoming project soon to be released. This next step for the franchise will have fans flocking to a different kind of theatre.

“Harry Potter & The Cursed Child”, opens a new window, written by J.K. Rowling, Jack Thorne, and John Tiffany, was first published as a self-contained two-part screenplay back in 2016. With it’s debut being hosted in six major cities: London, New York, San Francisco, Hamburg, Melbourne, and Toronto are looking forward to making this an event more than worth its weight in galleons. With an optimistic start in ticket sales, all together the theatres have expanded the debut to include 20,000 new seats available. If you're not inclined to travel, there are of course ways to experience this musical from the comfort of your own home. The soundtrack recording of the dedicated Broadway cast can be found in our collection at your St. Louis Public Library. "The Music of Harry Potter And The Cursed Child", opens a new window features all the songs of this two-part production, and then includes an atmospheric rendition of the full musical score. February 16, 2020 is when the magic comes to live audiences. So, mark your calendars, and keep your rememberalls in hand. Be sure to visit your St. Louis Public Library, and check out any titles you missed or want to relive the magical journey. 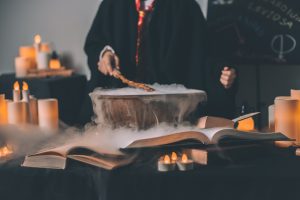 The ongoing success of Rowling’s work makes an important point about the magic of media. Our imaginations are stimulated by the limitless possibilities of a good story. Her characters feel real, and touch a human place in our hearts. This is what makes the wizarding world of Harry Potter able to exist in books, film, video games, and now the stage. As if transfigured by Professor McGonagall herself, the series stays faithful to its mythology. Harry Potter largely benefits from the powerful influence of Rowling as a formidable woman who understands and protects her content. This sets her world apart from the Middle-Earths, Narnias, and Earthseas whose content creators are long gone. Her influence guides the continuing stories to stay faithful to her fans, and amaze us every time.

Here at the Saint Louis Public Library system, we have dedicated professionals who understand and actively research the finer points of literature and new media. This gives us the great responsibility of making treasured stories available to the public. So, we are always eager to help, and happily welcome any questions from young and mature customers. Visit you’re the Saint Louis Public library nearest to your location, and find your key to unlock the magic of media that awaits you!!