How do you like your donut? Do you prefer the ring type, filled or donut holes? Donuts can be glazed, filled with sweet fillings, or iced with your favorite flavor. No matter how you like your donuts you can make your own with these titles from our digital collections. 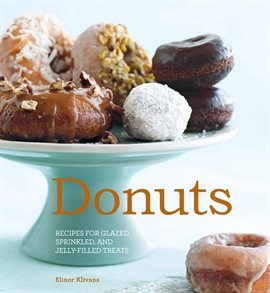 Review provided by Hoopla
Featuring over 40 donuts in all shapes and sizes, including new twists on old favorites, such as decadent salted caramel donuts; flavor-packed lemon-olive oil donuts; crispy bacon-topped donuts; and much more. 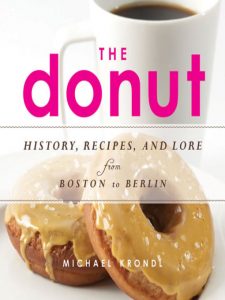 Review provided by OverDrive
The love for the donut in the United States is longstanding and deep-rooted. Gourmet donut shops have popped up in trendy neighborhoods across the country and high-end restaurants are serving trios of donuts for dessert, while Dunkin' Donuts, Krispy Kreme, and Tim Hortons have amassed a devoted following. In this captivating guide to the delectable dessert, culinary historian, chef, and donut lover Michael Krondl has put together an entertaining social history of the donut throughout the ages and from around the world. Among the interesting facts Krondl brings up are the donut's surprising role, not only as a traditional prelude to Lent, but in Hanukkah and Ramadan as well; the serving of donuts to American doughboys in the trenches of World War I; and the delivery by Red Cross Clubmobiles of essential comforts of home to World War II soldiers such as music, movies, magazines and—what else?—donut machines. 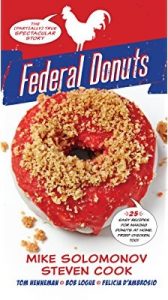 Review provided by Hoopla
A zany chronicle of the rise of America's hottest donut mini empire-with recipes-by the authors of Zahav, the James Beard 2016 Book of the Year "We knew absolutely nothing about making donuts." So begins this quirky story of how two James Beard Award winners hatched a harebrained idea that resulted in a mini empire and turned Philadelphia into a donut destination. Federal Donuts is at once an ode to an American passion and a collection of recipes for the cult-favorite hits. With a wad of cash in hand and a dream, Solomonov and Cook meet a Craigslist stranger in a parking lot and buy a used "donut robot." It would do all the rest, right? Regrets, partially raw donuts, and long lines ensue, but soon the partners work out the kinks and develop an exquisite dough delicately spiced with Middle Eastern aromatics. Strawberry lavender, guava poppy, pomegranate Nutella, and salted tehina are just a few of the imaginative flavors featured in this book. Also included are all the tips needed for making foolproof donuts at home. There is even a bonus recipe for the other specialty of "Fednuts": shatteringly crisp Korean-style fried chicken. 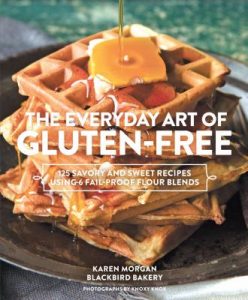 Review provided by Hoopla
In her second cookbook, Blackbird Bakery's Karen Morgan tackles the fundamental secrets to gluten-free delicious recipes: the six flour blends and getting them right. The Everyday Art of Gluten-Free is divided by flour blends - Biscuit, Donut and Fritter, Pie and Pasta, Bread and Pizza, Cake and Muffin, and Cookie Jar - with each chapter offering easy-to-follow recipes that demonstrate the versatility of blends and debunk the notion of an "all-purpose" flour. Morgan transforms more than 100 favorite comfort foods into gluten-free delights, including jelly donuts, chicken and dumplings, red velvet cupcakes, challah, and more. These treats boast the same taste, texture, and appearance as their gluten-based inspiration, and some - like the lemon-raspberry pop tart - are even better than the original. Packed with more than 100 photographs, The Everyday Art of Gluten-Free empowers its readers to make virtually any recipe into a delicious, gluten-free version.