Did you know that in 1863 ear muffs were invented by a fifteen-year-old? Enough cold walks gave Chester Greenwood the idea to create ear muffs so his ears could stay warm when he was outside. For the past 39 years in the state of Maine, the first day of winter is known as Chester Greenwood Day. His home town of Farmington holds an annual "Earmuff Parade" in his 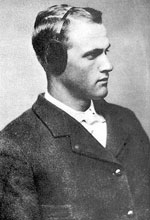 By the time World War 1 broke out, Chester owned a factory that produced 400,000 pairs of earmuffs per year. He sent thousands to overseas troops. Chester was a prolific inventor and invented almost 100 home and industrial devices.