Now that the weather has officially become cold, many outdoor-minded St. Louisans are looking to a favorite winter-friendly pastime—ice skating. Thought to date back as early as 3000 B.C., it is believed that ice skating was invented for survival rather than recreation. Ice skates were originally made of bone, like these medieval skates on display at the Museum of London: 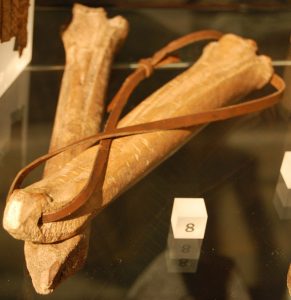 St. Louis’s own Steinberg Skating Rink only dates back to 1957, but it’s the largest outdoor rink in the Midwest with 27,600 square feet of ice. If you’re up for a mid-winter adventure, the rink is open for the season until February 23rd.

Of course, if you want the ice skating experience without the possibility of a painful spill on ice going viral, come check out the imitation ice rink installed in the Great Hall of Central Library for the exhibit: 50 Years of Blood, Sweat, and Cheers, celebrating 50 years of the Saint Louis Blues hockey franchise. The exhibit is free and lasts until March 4th.

And if you'd rather just spend the cold winter evenings at home in a Snuggie™, Saint Louis Public Library has numerous books and films about ice skating and ice skaters for all ages that can be enjoyed in the comfort of your very own Handy Heater™:

Michelle Kwan, Heart of A Champion