Despite his many enduring legacies -- foundation of the Church of England, patronage of the arts that ushered in the Renaissance, authorization to translate the Bible into English (making religious text available to commoners), establishment of the British Navy, creation of the Kingdom of Ireland, and the promotion of parliamentary government and an efficient tax system -- King Henry VIII is most popularly remembered as a tyrant (not unreasonable considering he was the bloodiest of all Tudor monarchs, having ordered the executions of an estimated 72,000 men and women, including those closest to him) and THE serial spouse. In observance of Henry VIII’s birthday on June 28 (1491), we are recognizing the unfortunate women who had the distinction of being his queen. Although the following history lesson is pretty awesome, these video interpretations are not only accurate, but a lot more amusing (thank you, clever people!):  I Am King Henry and Henry VIII. 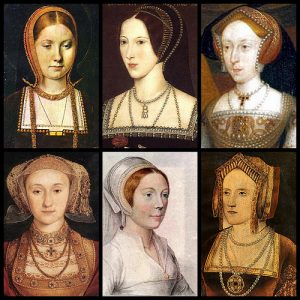 1) Katherine of Aragon: Katherine endured an incredible amount of heartache during her 24 years with Henry VIII, from the death of her first husband, Henry’s older brother Arthur, to several miscarriages and deaths of children, to Henry VIII’s public affair with Anne Boleyn, to years of humiliating divorce proceedings. She was finally sent into exile and disallowed from seeing her daughter Mary for the remainder of her life.

2) Anne Boleyn: Anne -- the original “other woman” -- is often looked at as the beginning of the end for Henry VIII. He wanted a male heir so badly, she was able to lead him on for nearly seven years before consummating their relationship on the marriage bed. Anne, Anne, Anne…be careful what you wish for! Henry VIII’s passion waned as Anne was unable to produce a son. When royal ears heard rumors that the queen was having an affair, she was arrested for treason and adultery, found guilty and beheaded – becoming the first queen in England’s history to be executed. Anne is not generally memorialized as the mother of the future Queen Elizabeth I, but as the tart who stole Henry VIII’s heart.

3) Jane Seymour: Jane’s dating profile met all of Henry VIII’s requirements: young, attractive, respectful, and, most importantly, obedient. Jane was golden because she accomplished the one thing that her predecessors could not -- she gave birth Prince Edward, the obligatory male heir needed to continue the Tudor dynasty. Although Jane contracted an infection during childbirth and died 12 days later, I tend to believe her to be among the fortunate wives since she exited the marriage with both her body and reputation intact.

4) Anne of Cleves: Henry VIII’s much needed strategic fourth wife, German noblewoman Anne of Cleves, has gone down in history as the Ugly One. Henry VIII was so repelled upon seeing her that he was heard to exclaim, “I like her not!” and ordered lawyers to end the marriage without compromising treaties. Since the grotesque, diseased middle-aged groom was hardly a catch himself, it shows just how desperate Anne was to get out of her own country. This lack of chemistry, and Anne’s inability to speak English, hastened the demise of the sham union. Sticks and stones…Anne of Cleves survived the marriage with life, limb, and a lot of hush money.

5) Catherine Howard: Young Catherine Howard, a mere teenager when Henry VIII became besotted and wed her, was a flirtatious, vivacious girl, whose true mistake was continuing her girlish indiscretions as queen. Her charm and allure were both her greatest strengths and weaknesses; while those traits attracted a king, they also led her into reckless behavior, conduct that was tolerated when she was a minor member of court, but treasonous as queen of England. Off with her head!!

6) Catherine Parr: Tired, old, sickly Henry VIII still craved female company, so he decreed that his next queen was to be Catherine Parr, a woman of taste since she tried to avoid that relationship like the plague. But he was a persistent old fart with a penchant for killing those who ticked him off, so she graciously agreed to become his wife and a mother to his children. She was also a religious zealot caught up in the turbulent religious climate amplified by the king; this passion would have ended her life had Henry VIII not died before ordering her execution.

Several authors have tackled the stories of these ill-fated women through their individual historical fiction series. Center for the Reader highly recommends the novels of these authors for their unique interpretations of this fascinating topic!