Come join the Culinary Book Club on Wednesday, March 2, 2016, from noon to 1 p.m in the monthly book club room located in the Locust Street Atrium next to the Central Library Cafe. Our street address is 1301 Olive Street, St. Louis, MO 63103-2325.

Yashica McKinney is the owner of J.J Sing catering and the creator of “Desserts Out The Jar”. Yashica learned early that life has a way of taking different ingredients (gentleness, patience, self control, perseverance…) that usually would not work effectively al 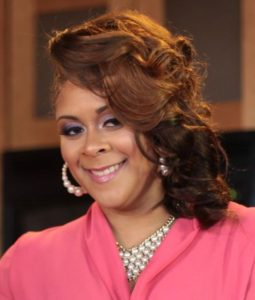 one but combining all of the ingredients together would create a recipe for success. Yashica knows a little about success. Actually the name Yashica means Success which derives from the Hindu origin.
Growing up in the city of East Saint Louis, IL (one of the most dangerously ranked cities in the world), Yashica managed to make the best of her situation. Yashica’s family went through a tough transition with the loss of many close relatives including her brother that was murdered during her senior year of high school. With much grief, Yashica continued her senior year but graduated with all D’s and F’s (she still carries the transcript to prove it).
Yashica continued to press forward with many obstacles and hurdles that were ahead. Yashica continued her education at Saint Louis Community College for 2 years because her high school grades did not permit for her to go directly to a 4 year university. After completing community college, Yashica continued her education at Southern Illinois University Edwardsville (SIUE) and completed her Bachelor of Science in Health Education. As easy as it sound on paper, Yashica raised a son, worked 2 jobs, and went to school full time for 6 years to receive that degree.
After receiving her degree, Yashica became a mentor in the St. Louis public school. Yashica has a passion for youth. She facilitates life skill courses and teaches one on one mentoring on topics such as bullying, self-esteem, goal setting, health and wellness, and entrepreneurship.
Yashica launched “Desserts Out The Jar” in November of 2014. Selling desserts was a paid hobby that brought a much needed second income for Yashica. Unbeknownst to her, Yashica did not know that her hobby would turn into a desired product and profitable business.
To date, Yashica has completed studies at the Grace Hill Women’s Entrepreneurial Business Center, appeared on the local news three times, given her testimony and promoted her product on several local radio stations, promoted her product on an Atlanta television station, and participated in a host of events since her start in 2014.
Yashica is working to complete her first book this year titled “Half Baked”. In February of 2016 she moved her home-based to her new office and commercial kitchen located on 3830 Washington Ave, St. Louis, Mo.

“I take no credit for my life and what has transpired for me within this year span of time. God is the author, illustrator, editor of my book of life. I would be remised by not acknowledge the source and guide of my journey. I fully understand that gifts are given and we have to be willing to share those gifts with others. Most of the time fear stifles our progress and we don’t live up to the full potential that God has called us to be. I was a teenage mother, almost flunked out of school but I paid the price and I did the work. I went to college, obtained a degree, got a job, and started my own business. I encourage everyone to seek out Gods perfect plan for their lives. It will be the best decision that they would ever make. I am enjoying the journey so much that I am in no rush to arrive at the destination.”
Yashica