In July 1518 Frau Troffea began to dance in Strasbourg, a city now in France. Unable to stop, Troffea would dance daily till she collapsed from exhaustion. After recovering, she would resume dancing. This went on for several days before others starting joining. By the end of the week there were about 30 people unable to stop dancing. Local physicians declared that this malady was caused by “hot blood” and that it could only be cured by more dancing. 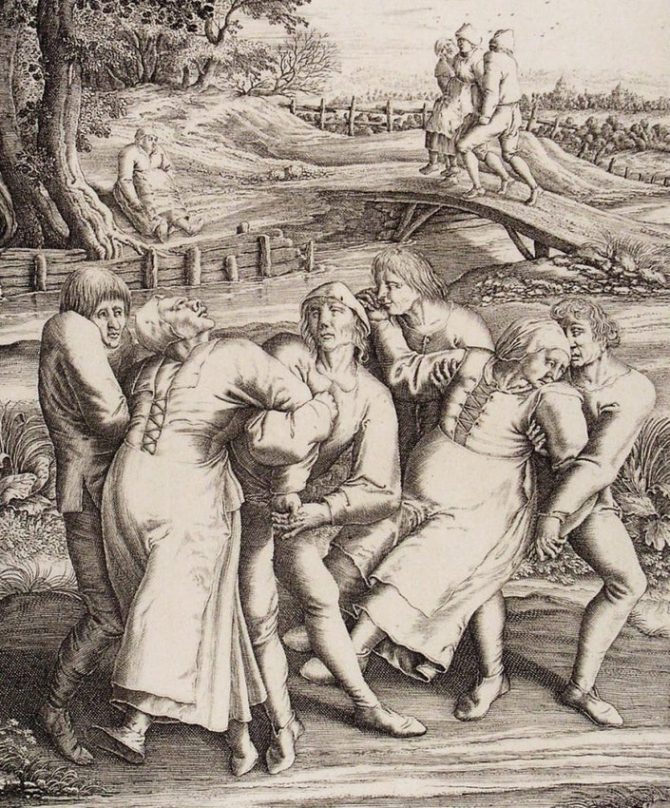 So the city constructed a stage and opened guildhalls for the dancers to dance in.  To encourage people to dance longer, and thus be cured quicker, bands were hired to provide music and professional dancers were provided to keep people dancing. Unfortunately this had the opposite effect. By the end of August there were over 400 people uncontrollably dancing. Though being unable to stop dancing seems harmless, the dancing plague claimed the life of several people who suffered strokes and heart attacks. Finally in early September the dancing plague started to wind down, and as quickly as it started it was over.

While the cause of the dancing plague in 1518 has never been proven, there are two leading theories. The first, and most likely, is a mass stress induced hysteria caused by an unusually harsh year of famine and disease. The other theory is the consumption of rye flour containing the ergot fungus. This fungal disease, tangentially related to LSD, can cause hallucinations and spasms which could have resembled dancing. However since similar manias took place in Switzerland, Holland and Germany, this theory seems less likely.

A History of France