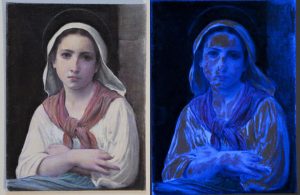 Do you know how authentication experts tell real works of art from forgeries?  You may have guessed that they rely on their years of knowledge of art, pulling from deep wells of expertise. While that’s true, their methods these days have taken on the feel of CSI. Testing a miniscule flake of paint can reveal where, and more crucially, when it was made. Does the chemical makeup of paint or varnish match the time period? X-ray fluorescence can detect paint and pigment type and if you want to delve further, infrared reflectography and Raman spectroscopy can go even deeper to the molecular level.

And then there’s Artificial Intelligence (AI). An article in The Guardian last summer focused on the new technique of using AI to look at the tiny, individual strokes that make up a painting. In 2017, researchers from the Atelier for Restoration and Research of Paintings teamed up with Rutgers University to develop a computational approach for analysis of strokes in line drawings by artists.  Their system broke down almost 300 line drawings by Matisse, Picasso and other famous artists into 80,000 individual strokes, which then were analyzed by a deep recurrent network (RNN) to learn which features in the strokes could identify the individual artists. They also trained a machine-learning algorithm to look for specific features, which gave them two different techniques to detect forgeries.  Their paper, “Picasso, Matisse, or a Fake?” may be found here.Taking their research a step further, the researchers looked at the information they were getting from the algorithm and the RNN and discovered that with both systems working together, they would see how the strength of a stroke would change, based on how hard an artist was pushing – and they were able to identify artists correctly about 80% of the time.

Of course, the AI method isn’t foolproof. Artists’ techniques and styles can change over time. Strokes aren’t necessarily always able to be completely individualized. If the brushstrokes are practically invisible, the AI technique won’t work.  And, even with the drawings, the machine can’t learn on its own; the algorithms usually need human adjustments to make sure the right features are being examined.

So this all sounds like theoretical science that no one’s using outside of a research group, right? Well, The Guardian article mentioned a trial in March, 2018, stating, “It isn’t a comforting time for art historians. Weeks earlier, in January, the Museum of Fine Arts in Ghent, Belgium, was forced to pull 24 works supposedly by many Russian artists – Kandinsky, Malevich, Rodcheko, Filonov – after The Art Newspaper (available to read in Central Library's Fine Arts Room) published an exposé arguing they were all forged. Just days before, there was uproar when 21 paintings shown at a Modigliani exhibition in Genoa, Italy, were confiscated and labeled as fakes. Works that had been valued at millions of dollars were abruptly deemed worthless.” 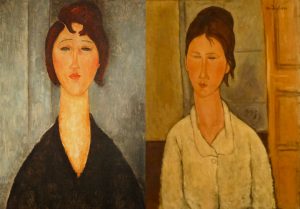 Most methods for analyzing paintings to detect forgeries are time-intensive, looking for mistakes made by the forger, like using a varnish that wouldn’t have been available in that century, or paint materials that are too modern for that work. However, this new AI-assisted method could be the tool that could change everything. While a work in progress as researchers look to expand to analysis of Impressionist works, it’s a potentially highly valuable tool for people like Jennifer Mass, an authentication expert who runs the firm, Scientific Analysis of Fine and Decorative Art. While she isn’t ready to give up her usual tools and techniques, she said to The Guardian, “A lot of people in the field are excited by AI. It’s not a magic bullet, but it’ll be another tool. And it’s really valuable when you’re dealing with a sophisticated forger who’s got everything else right – paint, paper, filler, all the materials.”

If reading this has made you curious about art forgery, we have several books in our collection including:
The Art of Forgery: The Minds, Motives and Methods of Master Forgers by Noah Charney
How to Identify A Forgery: A Guide to Spotting Fake Art, Counterfeit Currencies, and More by Suzanne Bell
The Art of the Con: The Most Notorious Fakes, Frauds, and Forgeries in the Art World by Anthony M. Amore.

We also have plenty of books and films that have plot elements about art forgery, including
The Thomas Crown Affair
The Forger
The Last Painting of Sara De Vos by Dominic Smith
The Art Forger: A Novel by Barbara A. Shapiro