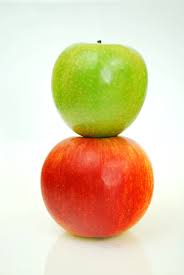 Where does the fruit in the grocery store come from? This article tells the story of the development of a new apple variety, and shines a light on an often overlooked type of patent.

Most patents are utility patents, but there are also design patents and plant patents. (Many other countries protect decorative designs differently, but here in the United States, they are covered by the patent system.)

From the USPTO: "Plant patents may be granted to anyone who invents or discovers and asexually reproduces any distinct and new variety of plant." Many bedding plants available in nurseries are protected this way, as well as many plants with fruits for human consumption. These plants have a variety of distinguishing desirable characteristics, from size to color to smell to taste.

Plant patents are contained in the USPTO's patent database, just like all other issued patents. However, they are not in color. PTRCs are sent physical copies every week, and make them available to anyone who wants to take a look at them in full glorious color.