The Soldiers' Memorial officially opened in downtown St. Louis on Memorial Day in 1938 to honor the memory of over one thousand St. Louis area military service members who died in the "War to End All Wars." President Franklin D. Roosevelt had visited St. Louis to dedicate the site of the future Memorial in October 1936, proclaiming in part:

The Soldiers Memorial Military Museum underwent an extensive restoration and reopened just before Veterans Day and the centennial of the end of World War I on November 11, 2018 and is now operated by the Missouri Historical Society under an agreement with the City of St. Louis. The Memorial is visible from the front steps of SLPL Central Library; the proximity of these two downtown treasures can be seen in the sketch at right, found on pages 12-13 of Soldiers' Memorial - St. Louis, a pamphlet put out by the Soldiers' Memorial Commission in 1940 in our reference collection. Also in our reference collection is a bound volume containing Annual Reports of the Soldiers' Memorial Building for 1945 and 1948, in which we learn that the annual visitor count for 1944-45 was over 175,000, and that in addition to all the other activities (meetings, classes, exhibits) at the Memorial, the U.S.O. was installed in the basement of the building "as a referral center where the boys from the armed forces can procure tickets for various activities such as ball-games, shows, dances, etc. they also have television, radio, record-players, ping-pong and other amusements to help while away their leasure [sic] time between trains or when on pass."

To celebrate the reopening of our neighbor and to commemorate Veterans Day, we pulled together a book display with the Soldiers' Memorial pamphlet and other treasures from our stacks, as well as more current titles that may be of use or of interest to recent veterans and their families. From the stacks, we gathered Registers of the Sons of the Revolution from Missouri and various states, and the proceedings of the Society of Colonial Wars of Missouri, comprised of lineal descendants of wars that occurred in the Colonies that later formed the United States "from the settlement of Jamestown, May 13th, 1607, to the battle of Lexington, April 19th, 1775." We also have proceedings from the United Confederate Veterans and of the Encampments of the Department of Missouri, Grand Army of the Republic. From the WWII era, there is a nice array of books on how to reenter civilian life such as The Veteran Comes Back from 1944, How to Cash in on your Discharge from 1945, & You're Out of the Service Now from 1946. 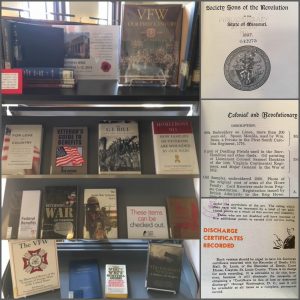 We have created this list of materials and still have our display up in the Social Sciences Room -- the books are ready to be checked out, or in the case of reference materials, perused here at Central Library. You may discover treasures within treasures, such as the listing of "Historical, Colonial and Revolutionary Relics and Articles of Interest pertaining to the Colonial and Revolutionary Times, exhibited under the auspices of the Society Sons of the Revolution in Missouri, at the Southern Hotel, St. Louis, February 20 and 22, 1897" in the Supplement to the 1896 Year Book of the Society Sons of the Revolution in the State of Missouri, including a "pair of Duelling Pistols used in the Burr-Hamilton and other duels." (see collage at left) You might also find, from the booklet Returning Veterans - Some Suggestions for Employers published by the Committee on Demobilization and Re-Employment and the St. Louis Chamber of Commerce in July 1945, the advice that veterans should record their discharge certificate with the Recorder of Deeds in St. Louis City Hall (again, see collage at left), advice that still holds true today; the St. Louis Recorder of Deeds will both record military discharges for veterans for free and provide free copies of discharge papers previously recorded for the veteran or surviving spouse (i.e., no copies for genealogical or research purposes).