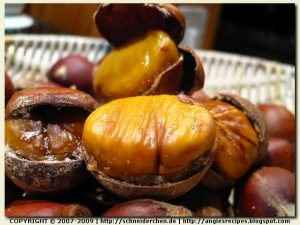 “Chestnuts roasting on an open fire….” is a popular tune you will hear during the December holidays. If you head to a city like New York in the month of December, you will actually find vendors with their carts of roasting chestnuts along the city streets! I think it is great to be able to warm up your frozen fingers with freshly roasted chestnuts.

I remember roasting chestnuts in November and December, when you could buy fresh chestnuts in the grocery stores. My mother would use a big black griddle on our stove to cook them. After taking a paring knife and cutting a small half inch cut on each side of a chestnut, we then placed them onto a griddle that was on medium heat. Usually we calculated about eight chestnuts for each person. Once the chestnuts were placed on the hot griddle, we took a pot lid and covered them up. It was a big enough pot lid that completely covered all of our roasting chestnuts. After about seven or eight minutes, I would lift the lid and, using a small spoon, flipped the chestnuts with the unroasted side now facing down onto the hot griddle. Once both sides are roasted, usually known by the great aromas of roasted chestnuts and the blackening of the outer layer of the chestnuts turn off your stove and spoon out your completely roasted chestnuts. Let them cool a few minutes, then grasp them with both hands and “crunch” their shell apart. Inside you will find a treasure of a fully roasted chestnut.

Currently, chestnuts are known from where they are grown. There is the Malabar chestnut (Puchira aquatica Aubl. (Bombacaceae) that is native to southern Mexico to Guyana and Norths Brazil and the western Amazon on flooded riverbanks. It is very rich in Vitamin A and protein. An 8 year old tree will produce about 130 fruit, and at 25 years, about 250 fruit/tree. It is considered a tropical to subtropical species.

There are many species of chestnuts around the world: Australian, Guianan, Malabar, Polynesian, and Tahitian. However, they all need to be cooked before eating. Cooking may be by roasting, grilling, boiling, baking, or even mashed.

In the Solomon Islands the chestnut tree has medicinal value as a treatment of urinary infections. Canoes are even made from the bark of a chestnut tree in this country.

If you are interested to learn more about chestnuts, go to read an encyclopedia book about nuts. You will be amazed by many new facts about this little known nut. You will not be disappointed. If you head to an Asian restaurant, you may be even pleasantly surprised when you dine on a hotpot dish and find chestnuts to eat!