Due to inclement weather, all SLPL locations will close at noon on Friday, Jan. 17. 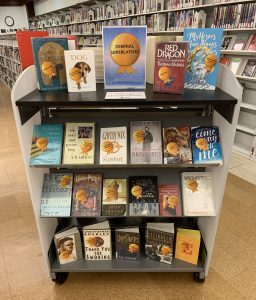 With a new decade upon us, many people are reflecting on their lives, and Center for the Reader is reflecting on our fiction. In December, we asked the employees of the Central Library to complete a survey and choose some of their favorite reads for a wide variety of categories. Now, for January, we have compiled that list into a display of recommendations like you have never seen before. With too many to choose from, we could only include a small selection here, so be sure to stop in Center for the Reader this month if you’re curious about our recommendations for the categories like Best Gal Pals, Most Likely to ReRead, Best Book to Bring Home to Mom, Best Villain, Best Book I Can’t Believe I Didn’t Read Sooner, and much more!

Character Most Likely to Talk Their Way Out of Trouble

Sir Percy Blakeney in The Scarlet Pimpernel by Emmuska Orczy

It is 1792 and France is in the grip of a seething, bloody revolution. Mobs roam the Paris streets hunting down royalists, barricades block any chance of escape, and hundreds die every day under the blade of Madame la Guillotine. But in the hearts of the condemned nobility, there remains one last vestige of hope: rescue by the elusive Scarlet Pimpernel.

Best Book That's Worth the Length

The Winds of War by Herman Wouk

Like no other masterpiece of historical fiction, Herman Wouk's sweeping epic of World War II is the great novel of America's Greatest Generation. Wouk's spellbinding narrative captures the tide of global events, as well as all the drama, romance, heroism, and tragedy of World War II, as it immerses us in the lives of a single American family drawn into the very center of the war's maelstrom.

Elsa is seven years old and different. Her grandmother is seventy-seven years old and crazy--as in standing-on-the-balcony-firing-paintball-guns-at-strangers crazy. She is also Elsa's best, and only, friend. At night, Elsa takes refuge in her grandmother's stories, in the Land-of-Almost-Awake and the Kingdom of Miamas, where everybody is different and nobody needs to be normal. When Elsa's grandmother dies and leaves behind a series of letters apologizing to people she has wronged, Elsa's greatest adventure begins.

Everything Is Illuminated by Jonathan Safran Foer

With only a yellowing photograph in hand, a young man, also named Jonathan Safran Foer, sets out to find the woman who might or might not have saved his grandfather from the Nazis.

Most Likely to Give You Nightmares

We Need to Talk About Kevin by Lionel Shriver

That neither nature nor nurture bears exclusive responsibility for a child's character is self-evident. But generalizations about genes are likely to provide cold comfort if it's your own child who just opened fire on his fellow algebra students and whose class photograph, with its unseemly grin, is shown on the evening news coast-to-coast. (Also available on Hoopla!)