Did your parents ever try coercing you into eating carrots? Did they claim “it will help you see better” or “they improve eyesight”? Would you be surprised to learn that this “fact” about carrots started during World War II as a means of deceiving the Germans? Let us explain.

As the Blitzkrieg raged across Europe German forces were using the cover of night to bomb the British coast. While blackouts helped hide cities, it mostly fell to the Royal Air Force to defend the mainland. Unbeknownst to the Germans, the British had recently developed a plane mounted radar which could locate the enemy planes even in the darkest of nights. 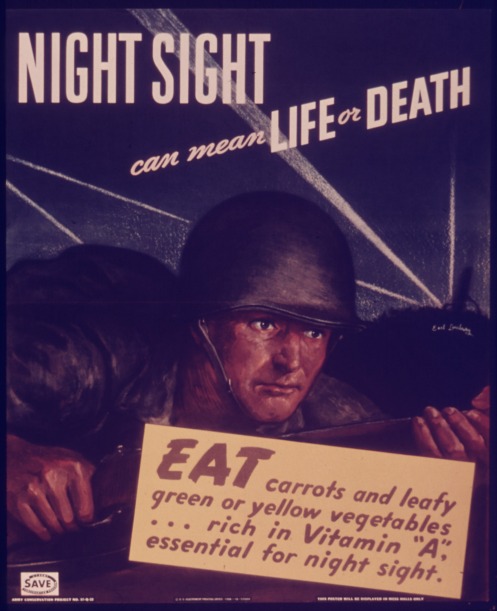 With this new technology, British fighters intercepted bombers before they reached the coast and shot them down. But the British Ministry of Information needed some way to hide this radar’s usage . . . so they turned to carrots. The Ministry claimed that it was all the carrots British pilots ate which let them see in the dark. While there is not much evidence that the Germans believed this ruse, it was accepted by the British people and has been part of culture ever since.

Carrots are very high in Vitamin A, a vitamin which is needed by the retina of the eye, but is not limited to that function. Vitamin A also plays a role in formation and maintenance of the heart, lungs, kidneys and other organs. Though carrots are very high in Vitamin A, there are high concentrations in spinach and sweet potatoes, though kids are just as unlikely to eat those. Vitamin A can also be found in tuna, peppers, cantaloupe, lettuce and a variety of other foods. Personally I would rather have a slice of pumpkin pie; while it only has half the Vitamin A as a ½ cup of carrots, it certainly tastes better.