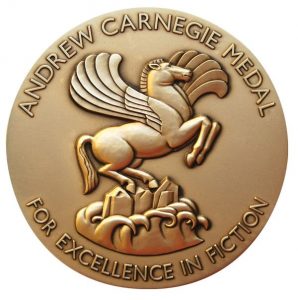 Andrew Carnegie’s deep belief in the power of books and learning to change the world was demonstrated through donations of an estimated $60 million to fund over 2,500 libraries worldwide, nearly 1,800 within the United States.

The Andrew Carnegie Medals for Excellence in Fiction and Nonfiction were established in 2012 to recognize the best in fiction and nonfiction books for adult readers published in the U.S. the previous year. The shortlisted authors and eventual winners reflect the expertise of a seven-member selection committee of library professionals from across the country who work closely with adult readers. The annually appointed selection committee includes a chair, one member of the American Booksellers Association, three Booklist editors or contributors, and three former members of RUSA CODES Notable Books Council.  Annotations provided by the American Library Association.

The winner of the Andrew Carnegie Medals for Excellence in Fiction in 2017 was Colson Whitehead’s The Underground Railroad (Doubleday, Penguin Random House LLC).

In this magnetizing and wrenching saga, Whitehead tells the story of smart and resilient Cora, a young third-generation slave on a Georgia cotton plantation. Certain that the horror will only get worse, she flees with a young man who knows how to reach the Underground Railroad. Each stop Cora makes along the Underground Railroad reveals another shocking and malignant symptom of a country riven by catastrophic conflicts, a poisonous moral crisis, and diabolical violence. Hard-driving, laser-sharp, artistically superlative, and deeply compassionate, Whitehead’s unforgettable odyssey adds a clarion new facet to the literature of racial tyranny and liberation.

A young writer listens in breath-help astonishment as his ailing grandfather, whose lifelong reticence has been vanquished by strong painkillers, tells the hidden stories of his past. By deftly infusing each spellbinding page with historical facts entertaining and tragic, effervescent imagination, exceptional emotional intricacies, striking social insights, brilliantly modulated drama, canny wit, and profound and uplifting empathy and compassion, Chabon has created a masterful and resounding novel of the dark and blazing forces that forged our tumultuous, confounding, and precious world.

The unnamed narrator in Smith’s agile and discerning bildungsroman is entranced and provoked by a Fred Astaire dance number in the movie Swing Time. “Swing time” is also a feat her narrator performs as she pivots from the disastrous present back to the past as she tries to understand her plummet by telling her story and that of her childhood friend, Tracey. With homage to dance as a unifying force, arresting observations, exceptionally diverse and magnetizing characters, and lashing satire, Swing Time is an acidly funny, fluently global, and head-spinning novel about the quest for meaning, exaltation, and love.