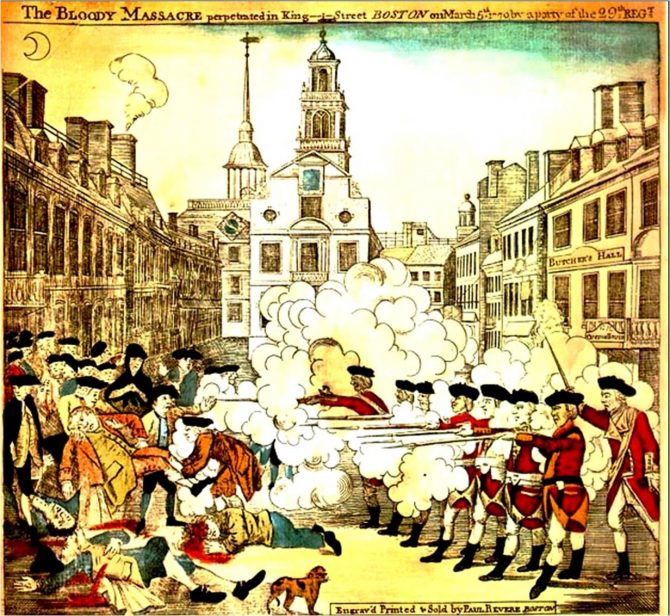 Boston played an important role in the American Revolution. It was the capital of the Provinces of Massachusetts Bay, the home of the colonial government, and the center of trade and commerce for the colony. Boston Harbor was the major port for the entire region and a vital maritime transportation center for all New England.

A series of events escalated the tensions between the American colonists and the British government during the early 1770's.Chief among the issues was the opposition to the British attempt to impose great control over the colonists and make them repay the British government for its defenses of the colonies during the French and Indian War. The first tax imposed was the Sugar Act of April 1764, followed by the Stamp Act of March 1765 and the Tea Act of 1773.

British military occupation beginning in October 1768 was a catalyst that helped solidify colonial resistance. The arrival and mandatory quartering of additional British troops in the city in 1770 was a factor that directly led to the Boston Massacre. On the night of March 5,1770, British soldiers fired into a gathering in front of the Boston Custom House, killing five colonists. The Boston Tea Party in December of 1773 took place in Boston Harbor when disgruntled American colonists dumped shiploads of tea into the water to protest the British tax on that commodity.

The Battle of Bunker Hill was the first major battle of the American Revolution. It occurred on June 17, 1775 during the siege of Boston. Even though the colonists lost the battle, it was a significant morale builder for the American revolutionaries. It also helped the British realize that a war with their American colonists might be long and costly, indeed.

The Library has many great resources where one can learn more about Boston in the American Revolution, including:

Boston and the Dawn of American Independence