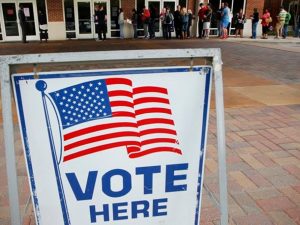 This year's Black History Month theme addresses the right to vote for African-American men and women.

2020 is the sesquicentennial (150 years) of the Fifteenth Amendment. The Fifteenth Amendment granted African American men the right to vote by declaring that the "right of citizens of the United States to vote shall not be denied or abridged by the United States or by any state on account of race, color, or previous condition of servitude." It was after African American males got the right to vote, all women were finally to vote in 1920, when the 19th Amendment gave women suffrage.

Despite the passage of these amendments, Southern states were still disenfranchising African Americans using poll taxes, literacy tests, grandfather clauses, and other means. Voter registration campaigns were organized so African Americans could register to vote at the federal, state or local elections, as well as to serve on juries.

Not until the National Voting Rights Act of 1965 was discrimination against African American voters made illegal. Read more about the impact when the law was enacted in these titles from our digital collections. 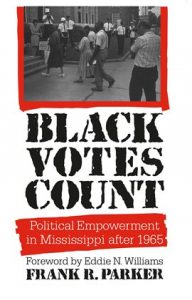 Review provided by Hoopla
Most Americans see the passage of the Voting Rights Act of 1965 as the culmination of the civil rights movement. When the law was enacted, black voter registration in Mississippi soared. Few black candidates won office, however. In this book, Frank Parker describes black Mississippians' battle for meaningful voting rights, bringing the story up to 1986, when Mike Espy was elected as Mississippi's first black member of Congress in this century.To nullify the impact of the black vote, white Mississippi devised a political "massive resistance" strategy, adopting such disenfranchising devices as at-large elections, racial gerrymandering, making elective offices appointive, and revising the qualifications for candidates for public office. 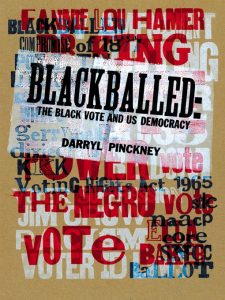 Review provided by OverDrive
Interspersed through the narrative are Pinckney's own memories of growing up during the civil rights era and the reactions of his parents to the changes taking place in American society. He concludes with an examination of ongoing efforts by Republicans to suppress the black vote, with particular attention to the Supreme Court's recent decision striking down part of the Voting Rights Act of 1965. Also included here is Pinckney's essay "What Black Means Now," on the history of the black middle class, stereotypes about blacks and crime, and contemporary debates about "post-blackness."

Review provided by Hoopla
After the ratification of the Nineteenth Amendment in 1920, hundreds of thousands of southern women went to the polls for the first time. In The Weight of Their Votes Lorraine Gates Schuyler examines the consequences this had in states across the South. She shows that from polling places to the halls of state legislatures, women altered the political landscape in ways both symbolic and substantive. Schuyler challenges popular scholarly opinion that women failed to wield their ballots effectively in the 1920s, arguing instead that in state and local politics, women made the most of their votes.Schuyler explores get-out-the-vote campaigns staged by black and white women in the region and the response of white politicians to the sudden expansion of the electorate. Despite the cultural expectations of southern womanhood and the obstacles of poll taxes, literacy tests, and other suffrage restrictions, southern women took advantage of their voting power, Schuyler shows. 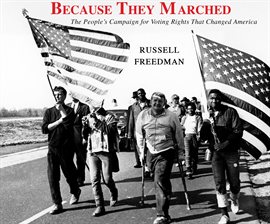 Review provided by Hoopla
In the early 1960's, tired of reprisals for attempting to register to vote, Selma's black community began to protest. The struggle received nationwide attention when Dr. Martin Luther King, Jr. led a voting rights march in January, 1965, and was attacked by a segregationist. In February, the shooting of an unarmed demonstrator by an Alabama state trooper inspired a march from Selma to the state capital of Montgomery. The march got off to a horrific start on March 7 as law officers attacked peaceful demonstrators. Broadcast throughout the world, the violence attracted widespread outrage and spurred demonstrators to complete the march at any cost. On March 25, after several setbacks, protesters completed the fifty-four-mile march to a cheering crowd of 25,000 supporters.