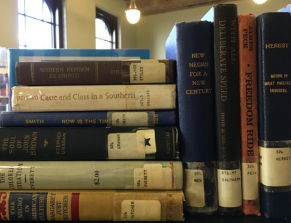 While we did put up the obligatory Black History Month book display in the Social Sciences room at Central Library during the month of February, we purposefully left it up longer than 28 days, and are blogging in late March to remind folks that St. Louis Public Library has Black history resources available all year round. This year we focused particularly on what we like to call "treasures from the stacks" - older books that reside in the non-public area of Central Library but which are deserving of our attention (& would love to spend a few weeks outside of this building). If you had the opportunity to see our display, you would have seen many primary source documents written at the time of or shortly after the events they explore. Some of these treasures include contemporary accounts of slavery - for example, Solomon Northrup's Twelve Years A Slave, which the Library holds in print form (including an 1853 copy held by our Rare Books department, and a copy in Vietnamese), as well as on audio CD (which is how this librarian enjoyed the book), and ebook; we also have the film in blu-ray or DVD and the movie soundtrack. By Dr. Carter G. Woodson (the "father of Black history" and creator of Negro History Week in 1926), we have The Mind of the Negro as Reflected in Letters Written During the Crisis (1800-1860), a collection of hundreds of letters collected through research done by Dr. Woodson "into the free Negro prior to the Civil War" and published in 1926 (ours is a 1969 reprint). In this book you will find letters from the well-known (Frederick Douglass), the perhaps less well-known (William Wells Brown, writing in 1849 from London to his former "master" in St. Louis at p. 213; search the SLPL catalog for books by and/or about Brown, including reprints of his 1853 novel Clotel, Or, The President's Daughter), and the unnamed ("A Colored Lady," "A Colored Gentleman in Maryland," and "A Colored American"). We have several titles by Dr. Woodson; you may enjoy paging through The Negro in Our History, The Mis-education of the Negro, African Myths, or one of his many other titles, or a biography about the man (again, we refer you to the Library catalog or the SLPL app).

As we pulled the exhibit together it was nice to see (and learn about) the female authors represented in our collection. From Maud Cuney-Hare we have Negro Musicians and Their Music (a 1996 "African-American Women Writers" reprint as well as the 1936 original). We have books by and about Pauli Murray, who wrote a paper (& made a bet) while a law student at Howard University in the 1940s (where she was the only woman in, and graduated at the top of, her class), which paper later gave rise to some of the legal arguments used by Thurgood Marshall in the 1954 Brown v. Board of Education Supreme Court case. (We pause here to note the recent death of Linda Brown, the young girl whose father sued so she could attend the all-white neighborhood school and who is the "Brown" in "Brown v. Board".) Ms. Murray wrote a number of memoirs, including Proud Shoes, and in 1950 was the author of a compilation of states' laws relative to race and color; we also have a few recent books about Ms. Murray.

Relative to Brown v. Board the Library has the 1955 book Now is the Time by Lillian Smith, which begins "It was May seventeenth. Many of us sat at radio and television, waiting. For word had gone out that the Supreme Court would hand down its decision on segregation in the public schools, that day" and the 1957 book With All Deliberate Speed in which Southern journalists reflected on the first three years after the Supreme Court decision, as well as dozens of books written in the decades since that landmark case was decided. 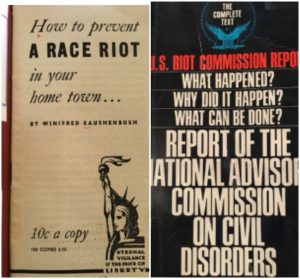 As you will see in this book list, a downside of using books from the stacks is that they often lack cool cover art in the SLPL catalog, and often in person as well due to the fact that these are older books that have been re-bound. Here are a couple of images to incite your imagination: for the 1st we are peeking inside the plain cardstock cover to see the cover page of a 1944 ACLU pamphlet (checked out as of March 28, 2018, but due back soon) entitled "How to Prevent a Race Riot in Your Home Town..." and the 2nd is a book including the full text of the Kerner Commission (a.k.a. the "U.S. Riot Commission") report, issued 50 years ago this month to examine the causes & suggest solutions to the racial divide and unrest culminating in the "Long Hot Summer" of 1967 and the violence that erupted in Detroit, Newark, and elsewhere.

And of course with your St. Louis Public Library card, there are r 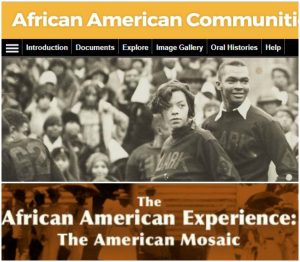 esources available to explore digitally as well, including the African American Communities Collection (available only at SLPL branches), a resource which focuses "predominantly on Atlanta, Chicago, St. Louis, New York, and towns and cities in North Carolina this resource presents multiple aspects of the African American community through pamphlets, newspapers and periodicals, correspondence, official records, reports and in-depth oral histories" and The African-American Experience: The American Mosaic (available remotely or at the Library), a "vast and accessible database [which] covers history, biographies, literature, arts, music, popular culture, folklore, business, slavery, the struggle for civil rights, politics, sports, education, science, and other themes". Both can be accessed via the "A-Z Resources" under the "Digital Content" tab on slpl.org.

We invite you to check out these and other SLPL books and resources and to explore Black history throughout the year - here at Central we would be happy to scurry off to the stacks to fetch a particular title or author, or just send us off to grab some interesting items from call number 326 or elsewhere in the Dewey Decimal System.