A while back you were asked to vote on the title for the next Great Big Read. The votes have been tallied and the winner is, This Is Where It Ends. Join the Global eBook Club with millions of readers from around the world. From October 13 - 27 everyone can download and read the same eBook at the same time without any holds. 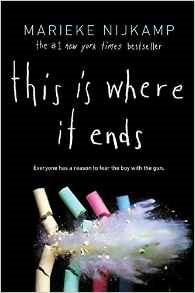 Everyone has a reason to fear the boy with the gun.
10:00 a.m.
The principal of Opportunity, Alabama's high school finishes her speech, welcoming the entire student body to a new semester and encouraging them to exceland achieve.
10:02 a.m.
The students get up to leave the auditorium for their next class.
10:03
The auditorium doors won't open.
10:05
Someone starts shooting.
Told from four perspectives over the span of 54 harrowing minutes, terror reigns as one student's calculated revenge turns into the ultimate game of survival.