This month I’m obsessed with Karen Barnett and her first book of the Vintage National Parks series, The Road to Paradise. The story takes readers to Mount Rainier in Washington State. Signed into law in 1899 by President William McKinley, Mount Rainier National Park is the nation’s fifth national park and the first created from a national forest. 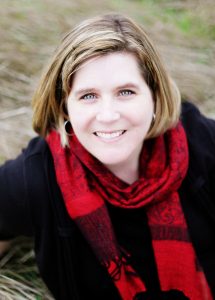 I loved this book. Where did you get your inspiration to write it? I grew with an absolute fascination of nature and could never get enough of studying plants, animals, geology, and essentially anything having to do with the natural world. I was born and raised in Washington with the mountain prominent on the skyline, so I felt a deep connection to the place. Later, when I turned to writing, I couldn’t resist setting a novel in this incredible park. Mount Rainier has it all—beauty, danger, wilderness—I couldn’t think of a more romantic location for a story.

You drew on your experience as a naturalist and former park ranger (you have tell me where) for the story. How much research did you have to do?  Where? Mount Rainier, of course! I was pursuing a master’s degree in geosciences at Oregon State University when I landed a summer job as a seasonal ranger. I worked there for two years, giving nature hikes and campfire programs. It was a dream job for me, and I have fond memories of my time on the mountain. Before working for the park service, I actually got my start in park work at a wildlife park in Washington, and after finishing my degree, I took a job as Park Naturalist at Silver Falls State Park in Oregon.

So by the time I decided to write The Road to Paradise, I already had a good understanding of the mountain’s natural history. I did spend quite a bit of time researching the history of Mount Rainier and the National Park Service (NPS). I read countless books on the park, and I also visited the park archives, sifting through photographs and documents to get a feeling for what it was like back in 1927.

How did you get interested in botany? Is botany even the right word? Botany is the science of plants, and it’s one of many areas that interest me. I guess you could say I’m interested in how nature works together, or “all the little bits and bolts of life” as my character Ford said in the novel. I had some incredible teachers in elementary school who encouraged my love of nature, and I spent a lot of time observing plants, insects, and birds in my own back yard while I was growing up. By the time I hit college, I majored in geography and took a minor in biology.

The year is 1927. Chief Ranger Ford Brayden tells Margie that they are snowed in from September through May. I believe that in 1927 there would be that much snow, but since global warming has become so apparent, do they still have that much snowfall? It’s true that in 1927 most of Rainier’s glaciers were advancing, but today they are all receding—and have been doing so for decades. With that said, most of the park is covered in snow from September through May, even today. Accumulation varies considerably from one year to the next and the amounts might surprise you. In the winter of 1927-28, snowfall at Paradise was 405”. In 2016-17, snowfall was 703”. It’s interesting to look at the totals. You can find them here:  https://www.nps.gov/mora/planyourvisit/annual-snowfall-totals.htm.

A major change from Margie and Ford’s time is that the National Park Service has improved their snow removal techniques, and they work very hard to keep Paradise open year-round. It’s always a good idea to call ahead and find out if the Paradise road is open on any given day. I checked in on Twitter today, just for fun, and the road is open but vehicles must carry chains.

Have you ever tried to climb Mount Rainier? Or any mountain? No, I haven’t. Like my character, Margie, I suffer from a fear of heights. I also have a healthy respect for the mountain’s dangers. I can see the appeal of climbing, but I’ve never felt a strong need to do it. If I had a life goal for Rainier, it would be to hike the Wonderland Trail. It’s a 93-mile trail that makes a complete circuit of the mountain, viewing the peak from all angles.

Why did you choose Mount Rainier as the first National Park for your series? Having grown up in the local area and also having had the privilege of working in the park—how could I not? In many ways, my heart lives there. That’s one aspect of the Vintage National Parks novels that excites me. Many people have a deep heart connection to one or more of our parks, and that’s the passion I’m trying to tap into.

Are Paradise and Longmire still there? Most definitely. People joke about Longmire being a “bathroom break” on the way to Paradise, but it has a beauty all its own. The rustic buildings I describe in the novel still stand, with their needle-and-moss-coated roofs and stone walkways. The old park headquarters is now the Longmire museum, and Ford’s loft office serves the naturalist staff. The administrative building (that Margie’s father was helping to fund in the story) is across the street and has the wide and welcoming front porch that Ford had envisioned. The National Park Inn is a beautiful place where you can sit in a rocking chair on the front porch and watch the sunset over Rampart Ridge and the dome of Mount Rainier.

Up at Paradise, the historic Paradise Inn is celebrating its 100th anniversary this year. The Inn, Guide House, and the historic Paradise Ranger Station still stand as cornerstones of the Paradise area. Gone is the meadow campground and many of the “improvements” made in the 1920s-30s (cabins, golf course, etc.) that Margie so feared. There is a beautiful modern visitor center, constructed to match the historic architecture of the area. 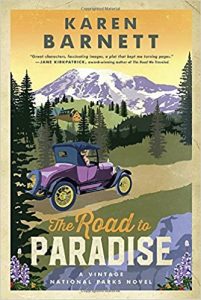 How did the characters of Margie and Ford develop? I based Ford on many of the men I met while I worked in parks, especially those from the state park system. The NPS has become quite streamlined, and employees serve in more focused positions today than they would have in 1927. But when I worked for the state parks, I met people who were skilled at serving as a “jack of all trades,” like I imagined National Park rangers must have been in a bygone era—capable of busting trail, helping visitors, filing reports and repairing tools. I remember many of these guys being tough (some would say “redneck”) fellows with hearts of gold and a deep love for their work.

I based Margie on myself when I first started at the NPS. I had a lot of book knowledge and excitement, but few practical skills in the outdoors. As I wrote the story, her character voice became far more poetic and whimsical than my own. I’d say Margie ended up being a little like a cross between me and Lucy Maud Montgomery’s Anne Shirley from Anne of Green Gables.

Phillip doesn’t have a redeeming quality in his body (that I read anyway). Even the villians should have something likable about them. In your opinion, what is Phillip’s redeeming quality? That’s a really good question! Philip’s redeeming quality is tightly connected with his deepest flaw. I think that’s often the case with good villains. In life, we’re all given choices, and those choices can come to define us. Philip desperately wanted to be a better person--respected and loved. Because he didn’t feel worthy of those things, rather than working toward his goal, he became consumed with envy and with the idea of claiming Senator Lane’s life for himself.

Margie comes from a wealthy family, yet she adjusted to the primitiveness of the park quite easily. Had she had prior experience? Another good question! No, she had little experience in that area. What she did have was a deep admiration for author-naturalists like Muir and Thoreau, who had put away their lives of comfort and privilege to experience something more profound—a sense of unity with nature. It’s not unlike friends of mine who have willingly given up what they have in order go into the mission field, adjusting to a far different lifestyle to pursue a deeper calling.

When I teach fiction writing, I have a class on the importance of the first sentence. Yours is beautiful, “The promised view of the mountain peak waited, cloaked in mist like a tissue-wrapped gift not ready to be unveiled.”  How and when did you decide that would be the first sentence? Thank you! I always struggle with the first and last lines of novels because they’re so vital to the reader’s experience of the story. This line came to me early in the process this time, because I remembered that feeling of anticipation every time I drove up to Mount Rainier. Margie’s voice is so lyrical, I wanted to give the reader a sense of her character right away. In later drafts, I tried backing up and opening the story with where she first refuses Philip’s proposal, but it never felt right. I chose to start with the overwhelming sense that this place was going to be key to her future.

(To be continued in Part 2)

“The Road to Paradise” is available as a book and an eBook.

Karen’s books in our collection:

The Road to Paradise

Out of the Ruins