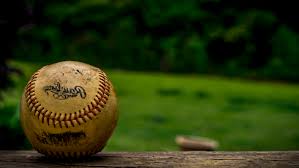 Fans are counting down the days until the April 5 home opener for the St. Louis Cardinals 2018 season; check this link for the 2018 schedule. This franchise, created as the St. Louis Brown Stockings in 1875, won four consecutive pennants from 1885 to 1888. Thereafter, the team was renamed the Perfectos in 1899 before becoming the Cardinals in 1900. What other tidbits do you know about your home team? Check your St. Louis Cardinal expertise with these 44 quizzes, totaling 440 trivia questions, on this cool website!

Several years ago, documentary filmmakers realized what a powerful metaphor the game of baseball represented for all Americans. After several years of effort, PBS produced an 18 ½ hour filmed history of the game for public television, and, as the arc of the life of Ebbet’s Field suggests, the filmmaker’s interest in the game goes well beyond the round-up of baseball highlights in this baseball documentary. A must see for baseball and history buffs alike.

As Harry Caray would say, “It’s a bee-yoo-tiful day for baseball!” So dust off the ball caps and slather on the sunscreen, and let’s head to the ballpark for some ice cold beer and a sizzling brat, and revel in the laziness of watching a rollicking game of America’s favorite pastime. Don’t forget to bring along one of the many baseball inspired fiction novels, listed here, as recommended by Center for the Reader for that seven inning stretch!

All the Stars Came Out That Night: Narrated by gossip columnist Walter Winchell, All the Stars Came Out That Night paints a vivid and moving portrait of Depression-era baseball - its raw joy and elegance but also its cursing, boozing, womanizing, and racism, and its odd relationships with bootleggers, racketeers, Hollywood stars, kidnappers, and even Dominican dictators. The date was October 20, 1934, just days after Diz’s Cardinals won the World Series. The place was Boston’s Fenway Park, under portable lights. The money behind it was Henry Ford’s, who yearned to see an all-white (and non-Jewish) team defeat the black all-stars. And the force behind it all was Clarence Darrow, the legal genius who pulled the political levers to make it happen. For Diz’s team there was Babe Ruth, Lou Gehrig, Shoeless Joe Jackson (overweight and still banned from the game), and a lanky minor- leaguer named Joe DiMaggio. Paige’s all-stars featured Josh Gibson, Cool Papa Bell (the fastest man from first to third), Turkey Stearnes, and Buck Leonard. With a gimlet eye for historical detail and a passionate love for the game, Kevin King chronicles this epic game between Diz’s and Satch’s all-stars—and the epic struggle to put it together. No trophies or championships were on the line, only the two most important things in life to any ballplayer - respect and redemption.

The End of Baseball: In Peter Schilling's wonderful novel, the extraordinary baseball season of 1944 comes vividly to life. Bill Veeck, the maverick promoter, returned from Guadalcanal with a leg missing and $500 to his name, has hustled his way into buying the Philadelphia Athletics. Hungry for a pennant, young Veeck jettisons the team's white players and secretly recruits the legendary stars of the Negro Leagues, fielding a club that will go down in baseball annals as one of the greatest ever to play the game. Here are the behind-the-scenes adventures that bring this dream to reality, and a cast of characters only history's pen could create. The End of Baseball is the most rollicking, free-spirited baseball story in years, the unvarnished truth of that incredible season and the men who lived it.

Hanging Curve: Expertly blending real events with fascinating fiction, Soos delivers a suspenseful, atmospheric slice of little-known American sports history. Mickey Rawlings, utility infielder for the St. Louis Browns, regrets that he's never had the chance to face some of the game's best players: those restricted to the Negro Leagues. So he's eager to accept an invitation to play against the East St. Louis Cubs, a black semi-pro team, even though he knows he'll be taking the biggest risk of his career. Baseball commissioner Kenesaw Mountain Landis doesn't want white major leaguers on the same field with black ball players. The only solution is for Mickey to play under an assumed name.
But it's April, 1922, and Mickey is about to discover there's more at stake than winning a baseball game. East St. Louis is a city scarred by the events of 1917, when white residents massacred their black neighbors in the worst explosion of racial violence in American history. Five years later, lingering shadows of hate still hover over the community, and when pitcher Slip Crawford leads his black team to victory, the Ku Klux Klan make their presence known, and Crawford is found dead.
Now, everything Mickey has ever fought for and everything he has ever believed will be challenged. From a first-hand view of segregation to meetings with stars of the new Negro National League - including Cool Papa Bell and Oscar Charleston - to a KKK rally in Indiana, Mickey sees a side of American life he's never experienced before.

The Might Have Been: For Edward Everett Yates, split seconds matter: the precise timing of hitting a low outside pitch, of stealing a base, of running down a fly ball. After a decade playing in the minor leagues, years after most of his peers have given up, he’s still patiently waiting for his chance at the majors. Then one day he gets called up to the St. Louis Cardinals, and finally the future he wanted unfolds before him.
But one more split second changes everything: In what should have been the game of his life, he sustains a devastating knee injury, which destroys his professional career.
Thirty years later, after sacrificing so many opportunities - a lucrative job, relationships with women who loved him, even the chance for a family - Edward Everett is barely hanging on as the manager of a minor league baseball team, still grappling with regret over the choices he made and the life he almost had. Then he encounters two players - one brilliant but undisciplined, the other eager but unremarkable - who show him that his greatest contribution may come in the last place he ever expected. 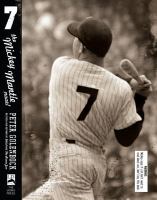 7: Bestselling sportswriter Peter Golenbock knew Mickey Mantle, Billy Martin, Jim Bouton, Joe Pepitone, and many of Mantle’s friends, family, and teammates. While Mickey was a good person at heart, he had a dark side that went far beyond his well-known alcoholism and infidelities. In this fictional portrait, Mickey - now in heaven - realizes that he’s carrying a huge weight on his shoulders, as he did throughout his life. He needs to unburden himself of all the horrible things he did and understand for himself why he did them. He wants to make amends to the people he hurt, especially those dear to him: the fans he ignored and alienated, and the public who made him into a hero. Mickey never felt he deserved the adulation, could never live up to it, and tried his damnedest to prove it to everyone. The fact that he was human made the public love him that much more.
Through the recounting of his exploits on and off the field, some of them side-splittingly hilarious, some disturbing, and others that will make your head shake in sympathy, Mickey comes clean in this novel in the way he never could in real life. 7: The Mickey Mantle Novel puts you inside the locker room and bedroom with an American icon every bit as flawed and human as we are.

The Veracruz Blues: When big-league ballplayers return from the war, unhappy with the contracts the club owners offer them, the wealthy Pasquel brothers pay unheard-of salaries to lure disaffected players - Sal Maglie, Vern Stephens, Danny Gardella, Max Lanier among them - to Mexico. When they get there, they see that the league already has major-league-caliber players, Negro Leaguers and Latinos, banned from the majors by the color line or shunned by subtler forms of racism. What follows is the first fully integrated season in the history of baseball. In a cast that includes Ernest Hemingway, Babe Ruth, Diego Rivera, and Frida Kahlo, at the center of this novel are Theolic "Fireball" Smith, Negro League star with dreams of being the one who breaks the color line in the U.S.; Danny Gardella, clown-prince wartime outfielder, whose mythic quest almost brings free agency to the majors in the 1940s; and Frank Bullinger, novelist-cum-journalist, "the youngest and most lost member of the Lost Generation," whose oral history this novel purports to be.

You Know Me Al: Jack Keefe, one of literature's greatest characters, is talented, brash, and conceited. Self-assured and imperceptive, impervious to both advice and sarcasm, Keefe rises to the heights, but his inability to learn makes for his undoing. Through a series of letters from this bush-league pitcher to his not-quite-anonymous friend Al, Lardner maintains a balance between the funny and the moving, the pathetic and the glorious. Nostalgic in its view of pre-World War I America - a time before the "live" ball, a time filled with names like Ty Cobb, Charles Comiskey, Walter Johnson, and Eddie Cicotte - this is not a simple period piece. It is about competition, about the ability to reason, and most of all it is about being human. First published in 1914, You Know Me Al says as much to us about ourselves today as it did seventy-five years ago.