The St. Louis Public Library presents an astonishing collection of letters and diaries harvested by Andrew Carroll and the Center for American War Letters on April 8 at 2 p.m. in the Central Library’s Auditorium, 1301 Olive Street.

The recently released book, “My Fellow Soldiers: General John Pershing and the Americans who helped win the Great War," tells the story of the American experience in World War I through letters, with General John J. “Black Jack” Pershing in the foreground against a landscape of extraordinary voices, to convey the grassroots perspective of American doughboys, war nurses and their families with extraordinary intimacy and power.

Carroll's portrait of General Pershing, the U.S. Commander in Europe, is a revelation. The scope of the challenge facing Pershing in World War I, and his ultimate mastery of it, were truly remarkable.

Leading a military force, that on the eve of its entry into the war, was downright primitive compared to the European combatants. Pershing surmounted enormous obstacles to command 1.5 million American soldiers to decisive victories.

Read more of Andrew Carroll's titles from our digital collections. 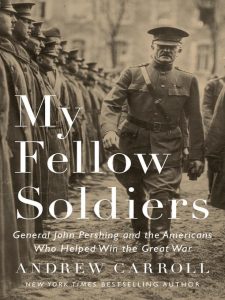 Andrew Carroll's intimate portrait of General Pershing, who led all of the American troops in Europe during World War I, is a revelation. Given a military force that on the eve of its entry into the war was downright primitive compared to the European combatants, the general surmounted enormous obstacles to build an army and ultimately command millions of U.S. soldiers. But Pershing himself—often perceived as a harsh, humorless, and wooden leader—concealed inner agony from those around him: almost two years before the United States entered the war, Pershing suffered a personal tragedy so catastrophic that he almost went insane with grief and remained haunted by the loss for the rest of his life, as private and previously unpublished letters he wrote to family members now reveal. Before leaving for Europe, Pershing also had a passionate romance with George Patton's sister, Anne. But once he was in France, Pershing fell madly in love with a young painter named Micheline Resco, whom he later married in secret. 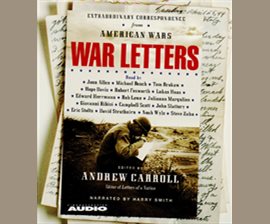 In 1998, Andrew Carroll founded the Legacy Project with the goal of remembering Americans who have served this nation and preserving their letters for posterity. Since then, more than 50,000 war letters discovered in basements, attics, scrapbooks, and old trunks have poured in from around the country. The best of these letters are assembled in this extraordinary collection, offering unprecedented insight into the Civil War, World Wars I and II, Vietnam, Korea, the Cold War, the Persian Gulf, and even the fighting in Somalia and the Balkans. Featured here are dramatic accounts of combat written immediately after the most ferocious battles American troops have ever faced; poignant expressions of love by homesick husbands and sweethearts; humorous anecdotes and gripes about insufferable conditions; thoughtful reflections on the nature of warfare; and perhaps most devastating, a startling number of last letters, heartfelt messages penned just hours before the sender was killed. These historic letters capture the full fury and intensity of warfare, and they reveal in vivid detail what the servicemen and women of this nation have experienced and sacrificed on the front lines. War Letters is a lasting tribute to those who have fought for this country, and celebrates the enduring power and lyricism of personal letters. 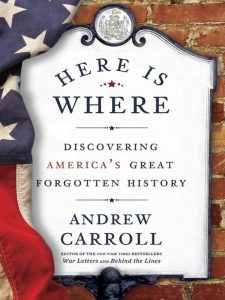 Here Is Where chronicles Andrew Carroll's eye-opening – and at times hilarious — journey across America to find and explore unmarked historic sites where extraordinary moments occurred and remarkable individuals once lived. Sparking the idea for this book was Carroll's visit to the spot where Abraham Lincoln's son was saved by the brother of Lincoln's assassin. Carroll wondered, How many other unmarked places are there where intriguing events have unfolded and that we walk past every day, not realizing their significance? To answer that question, Carroll ultimately trekked to every region of the country — by car, train, plane, helicopter, bus, bike, and kayak and on foot. 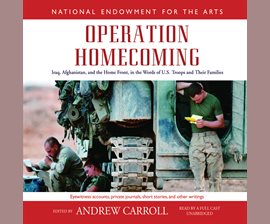 To encourage U.S. troops and their families to record what they saw, heard, and felt during combat in Afghanistan and Iraq, a series of writing workshops were organized in 2004. The result is this extraordinary collection of letters, poems, journals, memoirs, and e-mails accounts from those directly involved in battle. 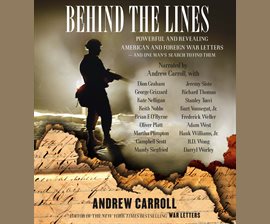 For three years Andrew Carroll traveled throughout the United States and around the world to seek out the most powerful and unforgettable letters ever written during US wars. Behind the Lines is the result of that extraordinary trip and represents the first audiobook of its kind: a dramatic, intimate, and revealing look at warfare as seen through the personal correspondence of US and foreign troops and civilians who have experienced major conflicts firsthand. From handwritten missives penned during the American Revolution to e-mails from Afghanistan and Iraq, Behind the Lines captures the full spectrum of emotions expressed in times of war. Like Carroll's phenomenal national bestseller War Letters, Behind the Lines is part of a larger effort to preserve correspondence that is riveting, insightful, and historically significant. This audiobook is also about Carroll's journey across the globe to visit the fields of battle where so many of these letters were written, meet with veterans and active duty troops who generously agreed to share their private correspondence, and speak with the family members who have lost their loved ones to combat. Behind the Lines is a tribute to those who have fought for freedom, as well as a lasting reminder to present and future generations of the true nature of warfare and the sacrifices it demands of individuals, families, and entire nations.