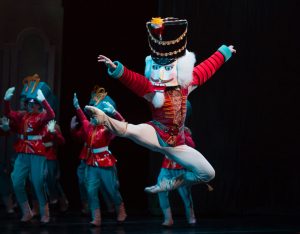 This December the well-known and beloved ballet, The Nutcracker, will be performed at the Touhill Performing Arts Center in St. Louis. Although the piece is one of the most widely attended ballets to date, The Nutcracker's initial debut at the Mariinsky Theater in Saint Petersburg was considered a flop. Derived from the 19th-century fairy tale, Nussknacker und Mausekonig, by German writer E.T.A. Hoffmann, the original stage performance was based on the lighter, less troubling adaption of the story written by French writer Alexandre Dumas.

The master Russian choreographer Marius Petipa was set to stage the production of the original Nutcracker, but he fell ill during the 1892-1893 ballet season and it is thought that the production fell to the theater's second Ballet Master, Lev Ivanov. Although reviews of the performance were mixed, the negative ones seemed to garner the most attention. In John Wiley's book, The Life and Ballets of Lev Ivanov: Choreographer of the Nutcracker and Swan Lake, one particularly disappointed critic called the ballet a 'mere spectacle,' and further diminished the work calling it " a pantomime absurd in conception and execution, which could please only the most uncultured spectators." Even the famed Russian musician Pyotr Tchaikovsky who wrote the iconic score to the Nutcracker (after composing the scores to Swan Lake and Sleeping Beauty) had his doubts about the ballet. In a letter to his brother during the composition of the score, he wrote, "This ballet is far weaker than The Sleeping Beauty-- no doubt about it."

Despite the negative press of the original performance, The Nutcracker consistently appears in 'top ten' lists of the best and most popular ballets of all time.  To see the ballet in person, check out the production being staged at the Touhill Performing Arts Center at UMSL. If you'd rather watch it from the comfort of your couch, you can check out the ballet on dvd from the library:

Or read one of the many books we have about the Nutcracker: