When St. Louis Public Library recently began offering cardholders access to the popular video tutorial site Lynda.com, opens a new window, out of curiosity I signed up for a class titled 12 Principles of Animation for CG Animators. Thousands of online courses are available from the site - from computer programming and web design, to SEO training and bass guitar lessons. Taught by David Andrade, the beginner level animation class I’m enrolled in clocks in at just under 1 ½ hours’ worth of video lessons. It also includes a large number of downloadable exercises. Both Maya and Blender (free and open source!) software are used to illustrate the principles, but the class emphasizes that all animation programs work similarly.

After the introductory video briefly mentioned English photographer Eadweard Muybridge (1830-1904) and his pioneering high-speed studies of bodies in motion, I couldn’t help but wonder if St. Louis Public Library held any of his original published prints. Sure enough, we have The Horse in Motion, as well as 44 large plates from the rare Animal Locomotion: An Electro-Photographic Investigation of Consecutive Phases of Animal Movements, 1872-1885. 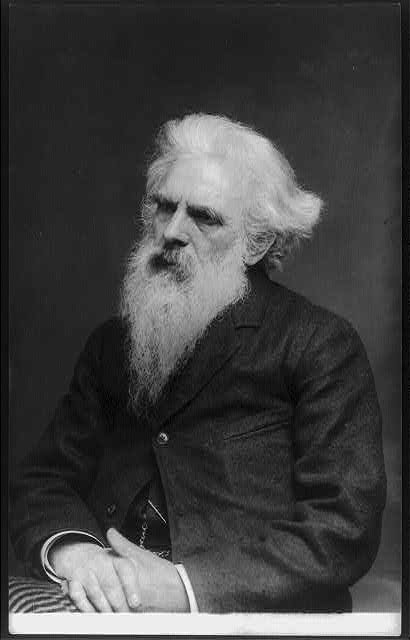 Often referred to as "Father of the Motion Picture,” the eccentric Muybridge, born Edward James Muggeridge, first gained prominence as a nature photographer, capturing the scenery of the American West and Alaska. However, beginning in 1872, he turned his attention to photographing action. He famously produced a sequence of shots of a galloping horse taken by multiple cameras whose shutters were triggered by trip wires. It was a technical breakthrough and produced images unlike anything previously seen. The Horse in Motion, published in 1882, which features Muybridge’s photography and physician J.D.B. Stillman’s analysis of horse anatomy, was spearheaded by industrialist, politician, and racehorse owner Leland Stanford. 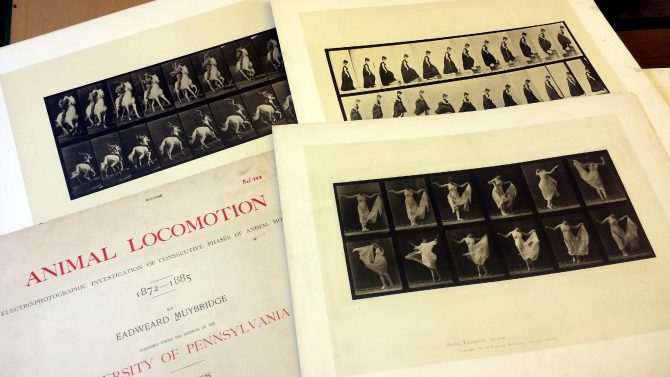 The photographic plates which comprise Animal Locomotion measure 61 cm. x 46 1/2 cm. They originally sold for 100 dollars for a set of 100 plates when they were printed in 1887. Muybridge considered this one copy. The subscriber was “entitled to select” from 781 different plates, thus forming a unique copy. All of the images appear, although reduced in size, in the 3-volume set of books titled Muybridge's Complete Human and Animal Locomotion. Published in 1979, it is available for reference at Central Library. A digital scan of the original prospectus, catalog, and other archives are online at the University of Pennsylvania University Archives, with whom he collaborated on the project. Additionally, the Library of Congress , opens a new windowhas nearly 100 images from Animal Locomotion available for download in a variety of formats. In addition to animals, the photographs show humans (often nude) performing a variety of activities, such as dancing, jumping, and climbing ladders. 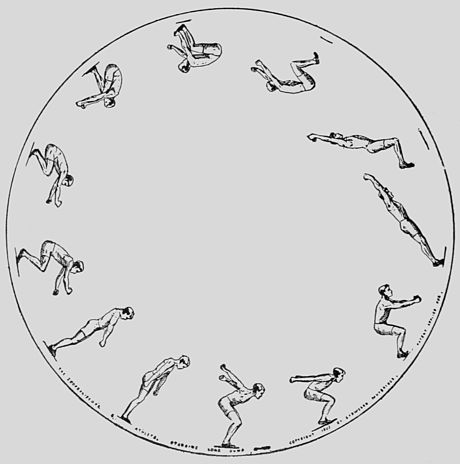 Muybridge’s personal life was nothing short of bizarre. In 1874, he shot and killed a man whom he believed might have fathered his son. At the trial he pleaded insanity, attributing his actions to a head injury suffered in a stagecoach accident years before. Although the insanity plea was dismissed, the jury acquitted Muybridge on the grounds that it was a justifiable homicide.
SLPL holds a number of biographies and photography books profiling Muybridge and his work. Recent titles include The Inventor and the Tycoon by Edward Ball and The Man Who Stopped Time by Brian Clegg. The recent horror fiction title, The Motion of Puppets, written by Keith Donohue draws on Muybridge’s unusual life, as well.

If you would like to visit Rare Books and Special Collections to see the first editions of The Horse in Motion or Animal Locomotion please call us at 314-539-0370. If you would like to enroll in courses offered at Lynda.com, you only need your library card number and PIN handy.