This data collection within Ancestry.com contains U.S. Navy cruise books for various ships and years from 1919 to 2009. It includes volumes in the Navy Department Library, owner of the nation’s largest collection of cruise books. You can locate this collection by searching in Ancestry’s Card Catalog using Navy in Title or Keyword.

Cruise books are similar in some ways to high school yearbooks. They are put together by volunteers on board ship to commemorate a particular deployment. They generally include a history of the vessel in question, plus labeled portraits of high-ranking officers. There is generally a biographical sketch of the current commanding officer. Some cruise books also include portraits of sailors and other personnel aboard the ship, accompanied by the individual’s surname and naval rate. When provided, portraits are generally organized alphabetically by surname within each division or department. Other features generally include candid photographs (often not labeled) of crew members at work and recreation. 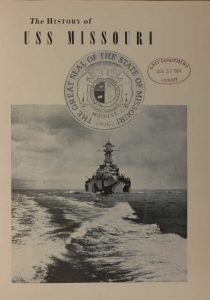 I browsed through a cruise book for the U.S.S. Missouri (BB 63, 1946). It included a section on the commissioning of the vessel, a history of its 1944-1945 cruise, and a special section on the acceptance of the Japanese surrender on the vessel, which was anchored at the time in Tokyo Bay. There is also a section on President Truman’s visit to the U.S.S. Missouri while it was anchored in New York Harbor after its return from the Pacific.

Cruise books are not official Navy publications, so the Navy does not sell or republish these books. This means that copies of some cruise books, especially older volumes, can be rare and difficult to locate.

This collection is searchable by ship name, ship ID, year, and name of crew member.
Given that photographs are often unlabeled, it may be necessary to page through cruise books for vessels on which a sailor was stationed should an index search prove unsuccessful. You can sometimes discover which vessels a WWII-era sailor served aboard using a separate Ancestry.com data collection, U.S. World War II Navy Muster Rolls, 1938-1949.