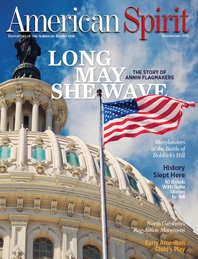 American Spirit 150:4 (Jul/Aug 2016) includes a number of articles of likely interest to our genealogists.

The Regulation Movement (pp. 26-30) details conflicts in colonial North Carolina between farmers and corrupt local officials over British laws, policies, and taxes. The conflicts took the form of petitions for reform, disruption of local courts, and even an honest-to-goodness battle (1771).

Playing in the Colonies (pp. 32-35) looks at toys and games colonial-era children used to amuse themselves.

Marylanders at the Battle of Hobkirk’s Hill (pp. 41-48) discusses a little-known battle in South Carolina that pitted colonial patriots against Loyalists and British regulars. The author believes that the battle deserves wider recognition since it helped set the stage for eventual Patriot victory in that state.