Pirates cause trouble and mayhem on the high seas. Check out some of their piratey antics from our digital collections. 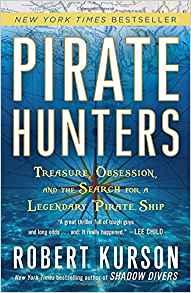 Finding and identifying a pirate ship is the hardest thing to do under the sea. But two men—John Chatterton and John Mattera—are willing to risk everything to find the Golden Fleece, the ship of the infamous pirate Joseph Bannister. At large during the Golden Age of Piracy in the seventeenth century, Bannister should have been immortalized in the lore of the sea—his exploits more notorious than Blackbeard's, more daring than Kidd's. But his story, and his ship, have been lost to time. If Chatterton and Mattera succeed, they will make history—it will be just the second time ever that a pirate ship has been discovered and positively identified. 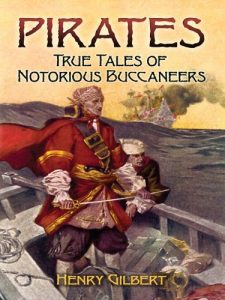 The practice of piracy dates back thousands of years. This riveting chronicle provides a glimpse into the vivid history of "sea thieves," from ancient Greek, Roman, and Norse brigands to the pirates of the Golden Age-the infamous seventeenth century buccaneers of the Caribbean's Spanish Main. Delve into the true adventures of notorious seadogs whose stories are as compelling as any legend. Meet the dastardly band of pirates who once captured Julius Caesar . . . the powerful Viking plunderers of the Saxon shores . . . and such well-known scallywags as Captain Kidd, Henry Morgan, Blackbeard, and Barbarossa. A rich gallery of historical figures and fascinating real-life tales, this saga of the seven seas will captivate armchair sailors, adventure enthusiasts, and historians alike! 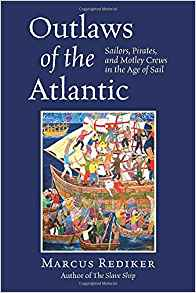 In Outlaws of the Atlantic, award-winning historian Marcus Rediker turns maritime history upside down. He explores the dramatic world of maritime adventure, not from the perspective of admirals, merchants, and nation-states but from the viewpoint of commoners--sailors, slaves, indentured servants, pirates, and other outlaws from the late seventeenth to the early nineteenth century. Bringing together their seafaring experiences for the first time, Outlaws of the Atlantic is an unexpected and compelling peoples' history of the "age of sail."

Ahoy, matey! Belay your carousin’ and start learning to speak Pirate. You’ll take your language skills across the seven seas, gathering treasure and having parrrrties on your ship. While pirates have a historically troubled and dangerous history around the globe, we want you to embrace the inventive language of Pirates and use their creative speech for good, not evil. Are ye up for the challenge of becoming a swashbuckler (pirate)? Shed your landlubber (land-lover) skin and haul wind with Mango!