Read how some made a new beginning after going through the tragic 9/11 experience with these titles from our digital collections. 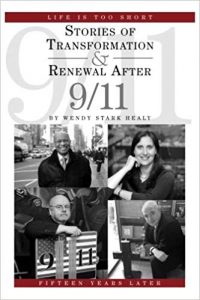 Review provided by Hoopla
We were all affected by 9/11. Thats not news, nor is it news that everyone grieves in different ways. How some people heard the call to service, how they heeded the voice calling them through the aftermath toward a new life, however, is striking and inspiring. As these people look back on how their worlds have changed, they can help us answer the heartrending question, Where was God? In Life Is Too Short: Stories of Transformation and Renewal after 9/11, author and journalist Wendy Stark Healy brings us the personal narratives of disaster responders, case managers, pastors, and those who worked in or near the World Trade Center, revealing how their experiences after 9/11/01 changed their lives for the betterforever. Healy shares the story of the pastor who blessed body parts at Ground Zero and, after healing his own emotional wounds, became a mental health counselor. Theres the aspiring actress and temp worker who became a spiritual healer after realizing healing is always possible, even amid unfathomable horror and despair. A Wall Street banker volunteered in an FDNY food tent before going on to run the September 11 Families Association. Healys stories of renewal and faith, of the normal people who used the gifts they were given to make the world a better place, show us the strength and power in helping one another and give us a roadmap for building a future of tolerance and peace. 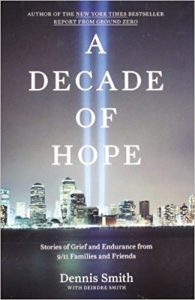 Review provided by OverDrive
Dennis Smith, a former firefighter and the author of the bestselling Report from Ground Zero, addresses this important topic in a series of interviews with the heroes and families of those most affected by the tragedy either through feats of bravery in the rescue efforts or heroic bearing up in the face of unimaginable loss. Smith provides an intimate look at a terrible moment in history and its challenging and difficult aftermath, allowing these survivors to share their stories of loss, endurance, and resilience in their own words. A Decade of Hope is an honest and vitally important look at a decade in the lives of those for whom a national tragedy was a devastatingly personal ordeal. 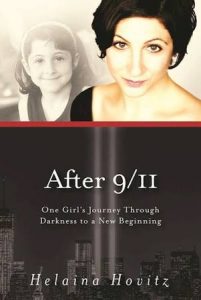 Review provided by Hoopla
Helaina Hovitz was twelve years old and in middle school just blocks away when the World Trade Center was attacked. Her memoir encapsulates the journey of a girl growing up with PTSD after living through the events firsthand. After 9/11 chronicles its effects on a young girl at the outset of adolescence, following her as she spirals into addiction and rebellion, through loss, chaos, and confusion. The events of 9/11 were a very real part of Helaina's life and are still vivid in her memory today. Hundreds were stranded in the neighborhood, including Helaina, without phones or electricity or anyone to help. Fear and despair took over her life. It would take Helaina more than a decade to overcome the PTSD - and subsequent alcohol addiction - that went misdiagnosed and mistreated. In many ways, After 9/11 is the story of a generation growing up in the aftermath of America's darkest day -and for one young woman, it is the story of a survivor who, after witnessing the end, got to make a new beginning. This new trade paperback edition includes tips on how to cope with trauma, an FAQ section, and a guide to discussing 9/11 with children. 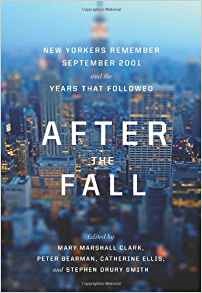 Review provided by Hoopla
Published to mark the tenth anniversary of the September 11, 2001, terrorist attacks, After the Fall is a landmark oral history drawn from the celebrated collection of 9/11 interviews at Columbia University. Within days of 9/11, Columbia's Oral History Research Office deployed interviewers across the city to begin collecting the accounts and observations of hundreds of people from a diverse mix of New York neighborhoods and backgrounds. Over subsequent months and years, follow-up interviews produced a deep and revealing look at how the attacks changed individual lives and communities in New York City. After the Fall presents a selection of these fascinating testimonies, with heartbreaking and enlightening stories from a broad range of New Yorkers. The interviews include first-responders, taxi drivers, school teachers, artists, religious leaders, immigrants, and others who were interviewed at intervals since the 2001 attacks. The result is a remarkable time-lapse account of the city as it changed in the wake of 9/11, one that will resonate powerfully with New Yorkers and millions of others who continue to feel the impact of the most damaging attack on American soil in history.