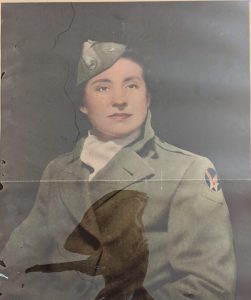 A particularly unique collection in the Rare Books and Manuscripts Room is the papers of local aviatrix, Adela Riek Scharr , opens a new window(August 10, 1907 - March 11, 1998).

The Library received the collection from the Scharr family in 2006, and it consists of 15 boxes of various letters, papers, photographs, ephemera and aviation tools. While many of the collections in RBM contain fascinating and important materials, this is the only one that has vintage flight goggles and binoculars, at least that we are aware of!

During WWII, Adela was recruited to join the Women's Auxiliary Ferrying Squadron (WAFS) which soon became the Women’s Airforce Service Pilots (WASP). These pilots were tasked with ferrying cargo and fighter planes across the US and Canada, so that they could be shipped to Europe to aid in the Allied war effort. As a WASP, she was the first woman to fly the P-30 Bell Airacobra, an illustrious fighter plane used by the Allied forces during the war.

After the war, she joined the Air Force as a major and later became a civilian flight instructor at Lambert Field in St. Louis. She retired in the early 1970s.

This collection includes dozens of Adela’s photographs, documents, and correspondence from the mid-century. Additionally, a good number of patches and buttons are included alongside her personal pilot equipment and gear. A worn leather case contains a pair of binoculars. Another contains her olive drab flight cap.

In the 1980s, Adela wrote a two-volume history of the WAFS and the WASP called Sisters in the Sky, opens a new window. The library has circulating copies of these if you would like to know more about Adela and the many other women pilots who helped win the war.

If you are interested in studying the collection when the Library reopens, please review the Finding Aid, opens a new window before reaching out to us, so we can better serve you. Thanks from the Rare Books Dept!