“A sad tale is best for winter: I have one. Of spirits and goblins.” 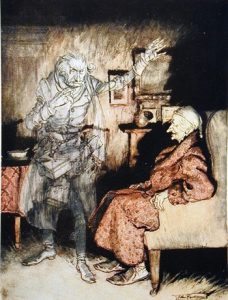 In 1848, Charles Dickens published a novella to celebrate the Christmas season; A Christmas Carol follows the redemption of Ebenezer Scrooge, a stingy and cold business man, with little patience for charity or kindness. On the night before Christmas, after a lonely supper and falling asleep in front of a dying hearth, Scrooge is visited by a phantom, his very old and very dead business partner and longtime friend, Marley. Marley, bound by the chains that he linked for himself in life, has visited Scrooge to try and warn him of his impending doom in the afterlife. Death is inevitable, but the chains that we create by our dishonesty, our unkindness, and downright meanness are avoidable at least.

Scrooge is faced with a challenge that night--he must atone for his ways by looking into his past, his present, and his future, or be subject to the same fate as his dead friend. In one night, three ghosts show Scrooge how he became the man he is, how others perceive said man, and what it means in the end. And for that, he must change so that he may save himself, as well as make an impact on those around him. A lot could be read into A Christmas Carol, but that is not the purpose of this post.

This post was inspired, in part, by the Dickens story, and his was inspired by many that had come before. 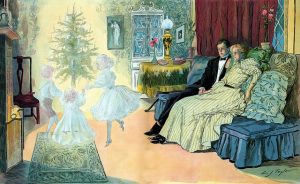 If one word can be associated with Christmas, it’s tradition. Everyone has one--some claim that theirs spans as far back as the Mayflower, and others are as new as a foiled tree. Tradition invokes a sense of familiarity, something ritual, almost ancient in thought, and they span across the board. Christmas ghost stories is one such tradition. A common staple with the season, more than the holiday, Christmas ghost stories enjoyed a burst of recognition and popularity in the Victorian period, especially with the advent of penny papers and stories posted in the newspaper. In fact, it was such a popular genre that many other then-famous authors wrote such stories, such as E.F. Benson and J. H. Biddell. Dickens was one of many who had written a yuletide ghost story, which often varied in theme and tone, but was always associated with the holiday or the season in general.

One such story was “Between The Lights” by E.F. Benson. This tale is set on Christmas Eve and looks back on the one the year before, when our host had a vision of primal, shack-entombed beasts advancing upon him as he sat out on the lawn and watched his wife and a good friend play croquet. Paralysis set in as the creatures advanced, and it was by a Christmas mercy that the hold was relinquished. (Colin Fleming, Ghosts on the Nog)

(For further reading: "Christmas Ghost Stories: The Ghost of Christmas Past Goes Further Back Than You Might Realize" via gothichorrorstories.com)

These stories are a Christmas mainstay, like mulled cider and chestnuts on an open fire. Mostly in England. But why Christmas? Surely there are other holidays, in which to tell a scary tale. And with such a variety of endings, settings, and tone, how can these stories be associated with the holiday? 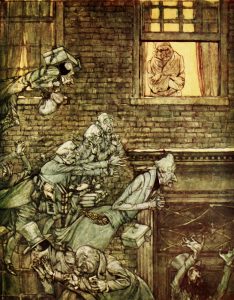 The Ghost of Christmas Past

To tell a story, any kind of story, generally invokes a kind of warmth, an image of being around or near a fire, and celebrating with people. Stories were just a form of entertainment and distraction. They can also serve as a lesson of sorts, much like Dickens, or a much more brutal lesson (or warning if you will), from Sir Andrew Caldecott, who wrote Christmas Re-Union;

“Again, we begin at a family holiday party, but there’s a guest who’s a ‘jerk’ [ I edited that bit, for the sake of appropriateness]. Everyone is pleased when he leaves, and wouldn’t you know it? He heads out at the same time as Santa Claus, or rather, the Santa the family thinks it hired to put on an act for the kiddies. The ‘jerk’ish [again, edit] guest, we learn, did his uncle a bad turn once upon a time, and this Father Christmas knows about it—worse still, he’s an avenging Father Christmas.”

Christmas ghost stories follow a theme of redemption, but also wrath, or restitution. This is the time of year where one is judged for their deeds, and, if they’re found wanting, are either punished or given one last chance to atone. A season of second chances and close calls with one’s own demise, strangely, could inspire some amount of goodwill towards others. It may also create a sense of gratitude, in what we may already have. The love of friends and family, a warm place to shield you from the cold, a full belly. This is the time of year where most seek out this kind of comfort, and most hide from the bitter cold.

To be confronted by a ghost, is to be confronted by the past itself, an entity so that screwed up its own existence so badly, who made mistakes so severe, that they must carry the weight of their earthly failure forever and ever, or until they get enough good deed stars on their report card, that they need to hand over to St. Peter These stories remind us, in the dead of winter, on a cold and flurried night, that out time is limited, and our resources, fleeting. And there can be worse fates than death.

The Ghost of Christmas Future

Christmas ghost stories have ebbed and flowed in popularity, over in England that is, for the past century now. What was once an oral tradition, made the move to radio serials and then eventually Christmas specials, such as A Ghost Story for Christmas, a series that ran for eight years on the BBC network, in the 1970’s (you can catch these on YouTube).

In the present day, most BBC series have a sort of Christmas special tradition, such as Doctor Who and Sherlock. Both series, though on a season hiatus during the holiday season, have an hour to two hour Christmas special, and they are almost always taken out the realm of the normal running’s of given shows working universe. One year, Sherlock’s Christmas special took place in a lucid dream Sherlock was having, where he was Victorian Sherlock Holmes, and solving a mystery that involved the ghost of a dead woman (the episode is called “The Abominable Bride”, its good stuff).

Doctor Who has done it as well, in traditional Whovian fashion, often with the threat of alien crabs and the end of the human race (Last Christmas, episode 253, season 10). (For further reading: "DOCTOR YULE: Christmases in the TARDIS" via hypnogoria.com) 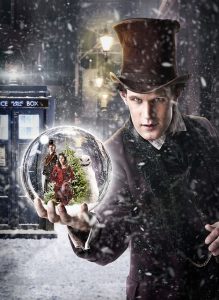 Essentially, it’s a tradition that will not die, (that was not intended), and one that could be a fun addition to American traditions, something add a little color to our “warm and fluffy” sensibilities. I mean, we kind did it, just not in the way that England would do it.

The Ghost of Christmas Slaughter

In the late ‘70’s, and early ‘80’s, there was a sudden boom of holiday themed horror movies, especially in the slasher subgenre. Black Christmas, (1974) Silent Night, Deadly Night (1984 [and it’s amazingly terrible sequels]), and Silently Night, Bloody Night (1974, respectively), these were movies that defined a niche in the slasher genre. Crazed men, dressed as Santa Claus, stalking young sorority girls or not very nice street thugs, festive murder weapons, such as string lights, Christmas trees, or any other number of ways to die festively. Though a very niche genre, it generated a lot of films in the ‘80’s and into the ‘90’s. The list is quite impressive, but the quality is often pretty lax. Of the earlier films, Silent Night, Deadly Night, would have to be the most character driven. A troubled young man, plagued with trauma after witnessing the brutal killings of his parents, by a man dressed as Santa Claus, he struggles to fit in the orphanage run by a cruel and merciless mother superior. As he grows, and internalizes his anger and pain, he finally lashes out one Christmas Eve, in a fit of gory rage, dressed as Santa.

A pretty corny plot, one played out so often, the nature vs. nurture argument, it is actually a pretty interesting look at how trauma, when untreated, can create monsters. The antagonist/protagonist, Billy, is a victim, haunted by the horrors that mankind can inflict on others. And he is even further damaged, by the very people who are supposed to protect him, when no one else will. In a way, Billy serves as a ghost, not in the traditional sense, but in the slasher sense. A modern day vengeful spirit, out to enact their own justice on those who have done wrong in the world. Of course most of Killer Santa/Billy’s victims were young people breaking typical slasher rules (no drugs/sex/drinking etc.) but a lot of his other victims were seen as “naughty” because of Billy’s upbringing by the Mother Superior. Billy is the vengeful fist of the mother superior, her Christmas themed creation. And the link in her long chain of offenses.

'Twas the Night Before...

If one were interested in carrying out the tradition, one would only have to check out the St. Louis Public Library, to find some spooky page turners, as well as the films that were mentioned earlier. Take look at this list and some of the resources in the blog post that were the source and inspiration of this post.