This Ancestry.com database is an index to individuals enumerated in the 1890 special census of Civil War Union veterans and widows contained on microfilm M123 (118 rolls) from the National Archives and Records Administration (NARA). In anticipation of the June 1890 liberalization of federal Civil War pension laws, this special census was intended to help Union Army veterans who might need the testimony of wartime buddies to help corroborate their service. Unlike any other federal census, this special census was supposed to be released to the public immediately after enumeration. This was to be accomplished via copies housed at various libraries and courthouses nationwide. But Congress never authorized funds to produce copies, therefore copies were never distributed. 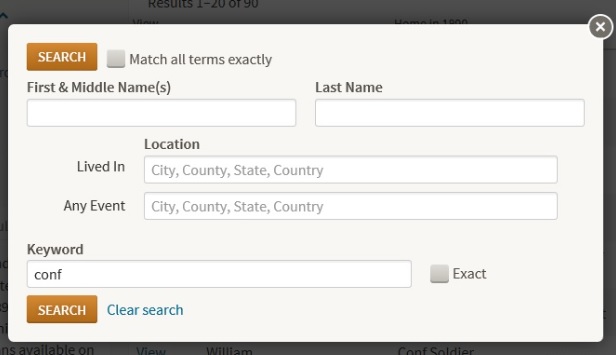 You can search in this record collection by using Ancestry.com’s Card Catalog. Search in Title for 1890 veterans. Although the 1890 special schedules were designed to enumerate Union veterans only, in a few areas Confederate veterans were also enumerated. These Confederates can be located by doing a Keyword search for Conf or Confederate.

Veterans schedules are sometimes used as a partial substitute for the 1890 federal population schedules, which were nearly all destroyed by the 1921 fire. While the veterans schedules are not an every name census, they do serve as a helpful (if incomplete) heads of household enumeration for that census year.

SLPL also owns some book indexes/transcriptions for the 1890 veterans census. You can search our Catalog for keywords 1890 veterans to survey these items.

There is a list of reference databases we subscribe to on the SLPL website. Ancestry.com is available for use at Central Library and any of our branch libraries.