An exceptional early natural science title we’ve recently delved into is Martin Lister’s Historiae Conchyloriorum. An English physician, Lister (1639–1712) is best remembered as one of the world’s first experts in spiders, insects, fossils, and shells. Historiae Conchyloriorum, his masterwork printed over several years (1685-1692), is considered the first systematized publication on shells. What makes his opus particularly special is that it is comprised entirely of copper engravings created by his teenage daughters, Susanna and Anna.

“I did send home a Box of Colours in oil for Susan & Nancy [Anna] to paint with. As for the pencils sent with them, and the colours in shells, which are for Limning, I would have thee lock them carefully up, till I return, for they know not yet the use of them”— Letter from Martin Lister to his wife Hannah, July 1681.

Just 11 and 9 years old at the time of this letter, the Lister sisters were soon expert book illustrators – or limners – a term not often used today. Taught by their father, a skillful artist himself, the young women may well be the first female scientific illustrators to use microscopes. Lister’s creative control of his work did not end with the employment of his daughters as draftswomen. Historiae Conchyloriorum is printed on the same thin watermarked paper Lister used for correspondence, suggesting it was completed on a home press. 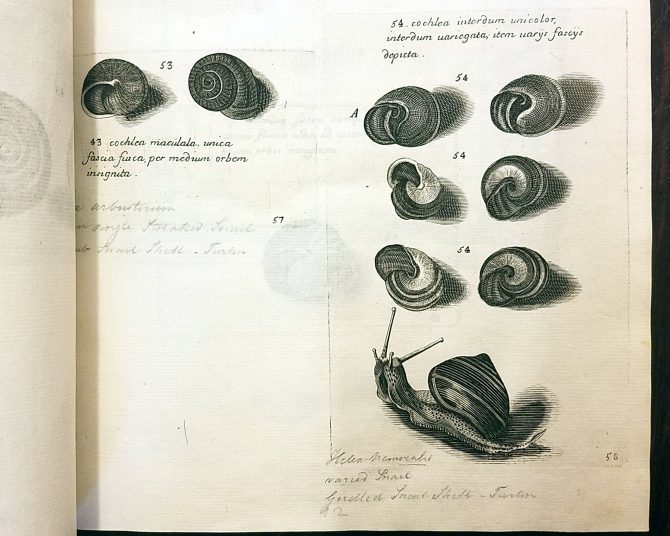 Susanna and Anna also engraved ornate decorative borders which frame frontispieces and many of the shell illustrations. This would have meant the already fragile paper went through the press twice, occasionally damaging the pages. One of our volumes shows evidence of strips of paper pasted on the back of an image for reinforcement.

Anna Marie Roos, a science historian at University of Lincoln History of Science and Medicine United Kingdom, has studied and written about the Listers extensively. Her informative journal article, "The Art of Science: A 'Rediscovery' of the Lister Copperplates," is available for download in JSTOR digital library, which is accessible to SLPL cardholders. A forthcoming book length investigation by Dr. Roos, Martin Lister and His Remarkable Daughters: Art and Science in the Seventeenth Century, is set to be published later this year.

If you are wondering how St. Louis Public Library came to own such a unique, historically important early science work, Historiae Conchyloriorum is just one title in the Shumard Collection, held in Rare Books & Manuscripts at Central Library. In 1869, the Library purchased the private library of renowned American natural scientist and physician Benjamin Franklin Shumard. President of the prestigious St. Louis Academy of Science at the time of his death, Shumard’s library boasts significant geological, paleontological, and botanical books.

To view Historiae Conchyloriorum or other items held in Rare Books & Manuscripts, please give a us a call at 314-539-0370. We look forward to hearing from you!