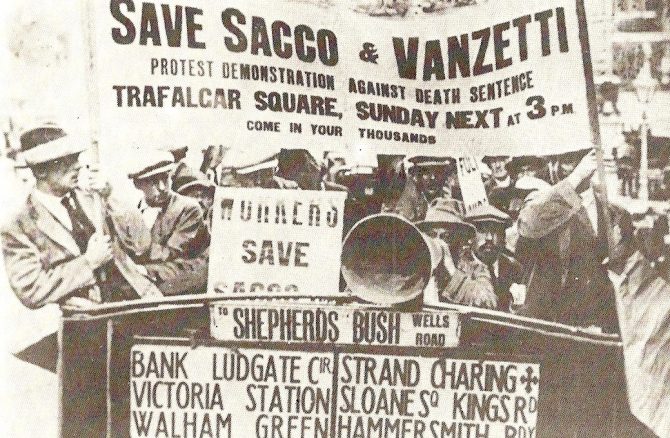 On May 5, 1920, Nicola Sacco and Bartolomeo Vanzetti were arrested and charged with the murder of two men during a robbery in Braintree, Massachusetts. Their arrest was controversial, and the public reacted to what was perceived as anti-Italian and anti-Anarchist motives amongst the arresting police force. Over the past century, their case has been endlessly argued. Some think they were simply violent thieves who murdered in cold blood, others looked at contradictory evidence presented during the trial and concluded that they were easy scapegoats for an unsolvable crime. The two were executed seven years later, and in August of 1927, protests erupted not only in every North American city, but also in most international capitals.

The morning after the execution, The St. Louis Post-Dispatch reported that over two hundred were injured during a protest in Paris. Controversially, Sacco and Vanzetti were members of the Galleanists, an Italian Anarchist group who advocated for violent strikes against capitalist targets. This was done mostly through bombing, but it's unclear how much participation Sacco and Vanzetti had in the group. The Wall Street Bombing of 1920, thought to be in response to their arrest, killed 30 people and injuring hundreds. At the time it was the worst terrorist attack on American soil.

Fifty years after their execution, Governor Michael Dukakis declared August 23, 1977, to be Sacco and Vanzetti Memorial Day in the state of Massachusetts. He acknowledged that they were denied their civil liberties and treated unfairly. Unfortunately, this was not the last time that high-profile arrests of minorities were challenged for being prejudicial.  In 2009, Henry Louis Gates, Jr., a Harvard professor, was arrested outside of his home by Cambridge police who were responding to a 911 call saying that Gates was attempting to break into his own residence. Last year, two African-American men were arrested in Philadelphia for sitting in a Starbucks without ordering anything. History can repeat, but it can also rhyme. What changes aren't prejudicial abuses by those in authority, but instead the list of groups who are being persecuted.